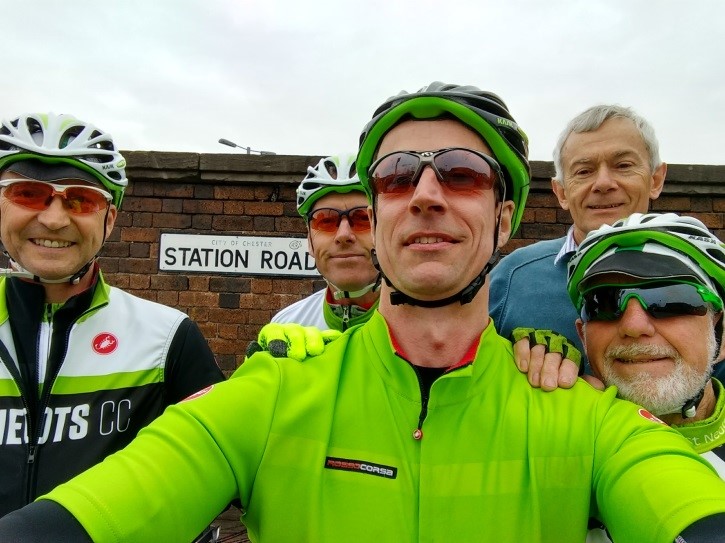 As you may know, last year Staś (Chobrzyński), David (Spoors) and I (Mike Biggs) had a long April weekend in Scotland, as training for the classic LEJOG trip later in the year. We enjoyed both trips so much that we vowed to do something similar as soon as we could. So in April this year, we headed over to Wales to ride from Chester to Carmarthen, about 220 miles, over 3 days (so about a quarter of a LEJOG). This time, we were joined by Dave (Richards), to provide some local muscle (protection from the locals), and Roger (Silk), who kindly offered to be our support driver.

If you read any of our LEJOG blog, you’ll know the type of trip we had in mind:

So, not a trip for perfecting your chain gang technique (although I enjoy those too), racing for town signs or busting a gut to get to the top of the hill first.

Friday’s ride was a nice warm up, 66 miles from Chester to Bangor with only 3,000 ft of ascent. The first half was flattish and the second half a bit more lumpy, including the stunning Conwy Bridge and Sychnant Pass. 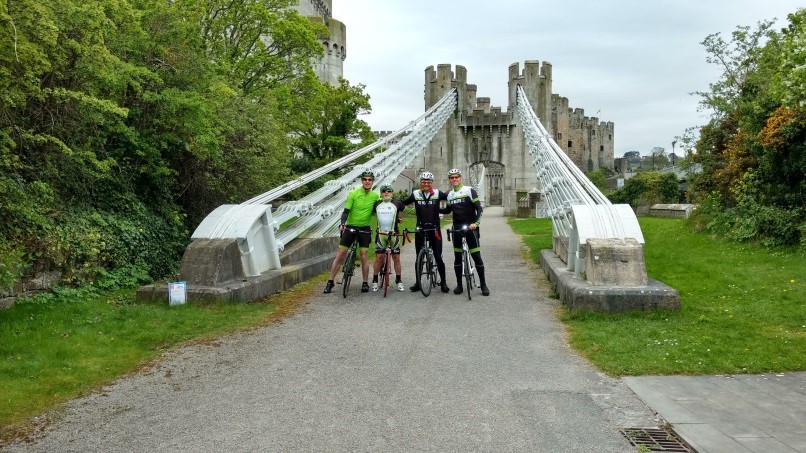 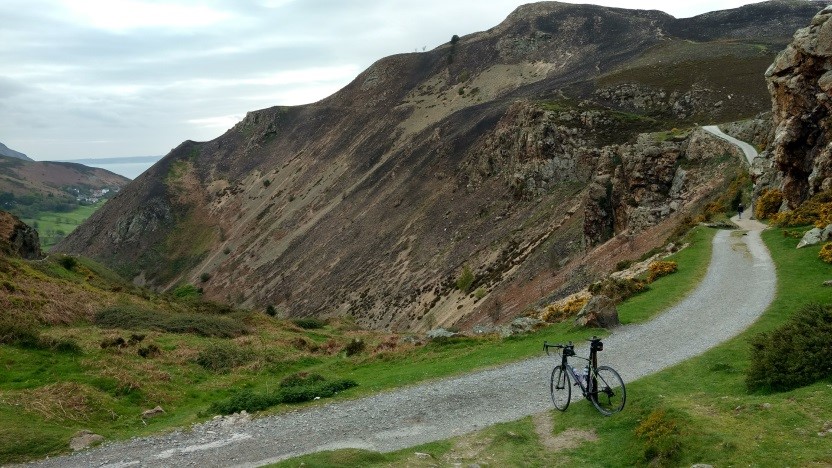 The ride was temporarily halted by a mechanical with David breaking a spoke and buckling his rear wheel.   Any apprehension over friction with the locals was soon dispelled as a kindly passer-by (who happened to be a fellow cyclist) offered to ferry David to the local bike shop in his van, while the rest of us followed in close pursuit.

Saturday – from Bangor to Borth – was rather more challenging, both in terms of distance (100 miles) and terrain (5,000 ft of climbing through Snowdonia). 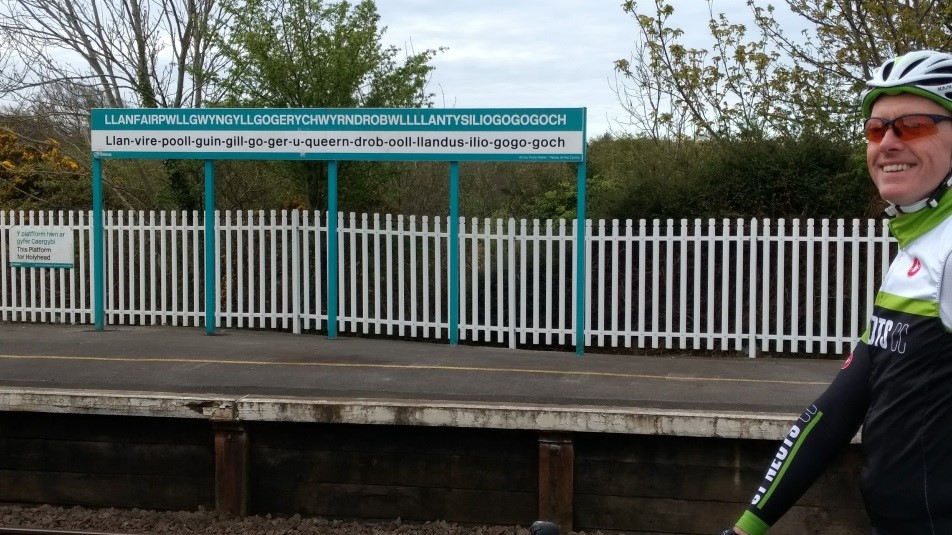 After a quick visit to Anglesey via the Menai Bridge to see the railway station with the record-breaking name (and back to the mainland on the new Brittania Bridge), we continued on our way, over the Snowdon Ranger Pass, to Beddgelert and time for Staś to deliver the history lesson for the day.

In case you are unaware, the stone monument in the field at Beddgelert marks the resting place of 'Gelert', the faithful hound of the medieval Welsh Prince, Llewelyn the Great. 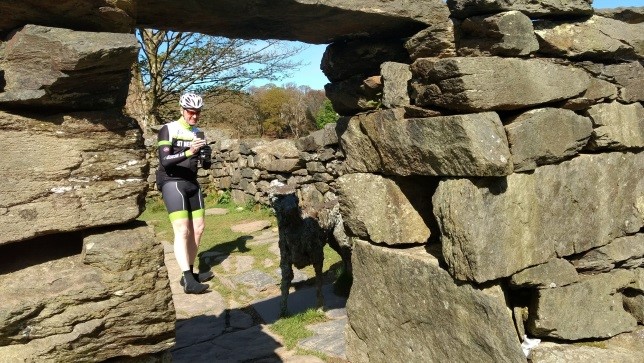 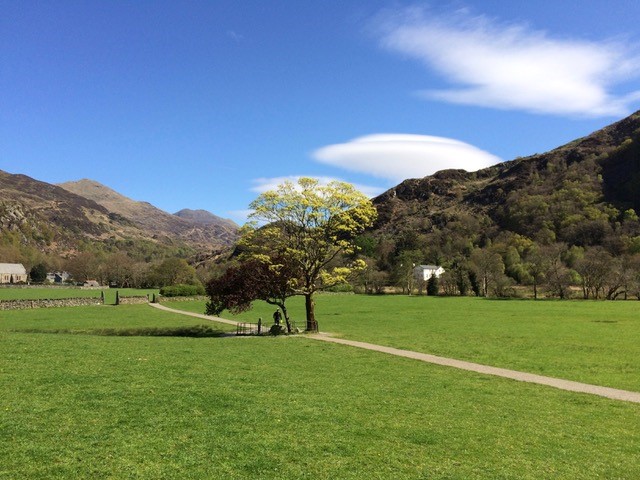 The story, as written on the tombstone, reads:

"In the 13th century Llewelyn, prince of North Wales, had a palace at Beddgelert. One day he went hunting without Gelert, ‘The Faithful Hound’, who was unaccountably absent.

On Llewelyn's return the truant, stained and smeared with blood, joyfully sprang to meet his master. The prince alarmed hastened to find his son, and saw the infant's cot empty, the bedclothes and floor covered with blood.

The frantic father plunged his sword into the hound's side, thinking it had killed his heir. The dog's dying yell was answered by a child's cry.

Llewelyn searched and discovered his boy unharmed, but nearby lay the body of a mighty wolf which Gelert had slain. The prince filled with remorse is said never to have smiled again. He buried Gelert here".

So that’s why the Welsh are such miserable buggers!

We were discussing the legend over dinner in the pub that evening when a local couple had the audacity to say that the legend was made up by the Victorians to boost tourism. Yeah, right, and I suppose you’re going to tell me that Gavin and Stacey aren’t real people either!

Sunday, 60 miles and 6,000 ft of ascent from Borth to Carmarthen, presented some rather large hills – with 4,000 ft of ascent in the first 30 miles! After a mere mile, we hit the first 25% beast – one of those climbs which fools you into thinking you’re nearing the peak only to round a bend and see another section heading skywards. That proved to be pretty much the order of the day with big hills in quick succession. We soon found out who had done their winter training and who hadn’t. Nuff said! 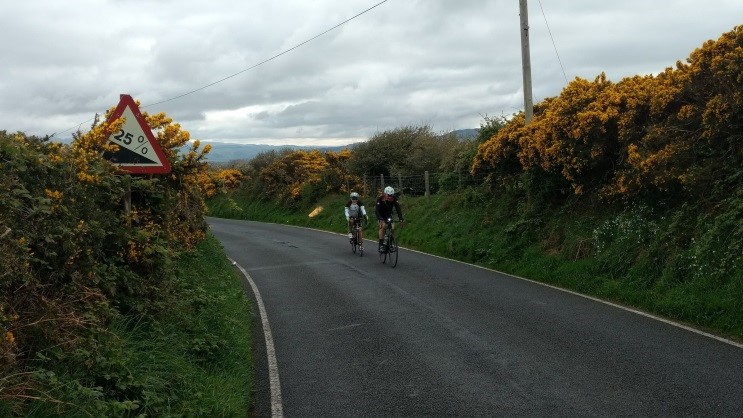 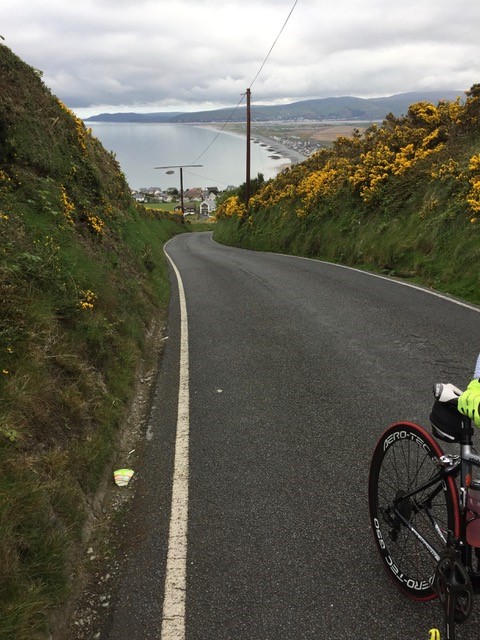 Despite the hills, we made it to Carmarthen in time for Staś and David to catch their train home. Huge thanks to Staś, for planning the trip, and to Roger, for his excellent support services and his outstanding homemade energy bars.