Twelve hardy souls braved the torrential rain to battle against the clock, on Staughton Moor’s wild slopes, for the glory of being the St Neots Hill Climb Champion 2013. Despite the miserable weather, some of the club’s strong riders turned out, with several of the favourites on the line, including defending champion Richard Ostler, a seriously on form Joe Finucane, TT powerhouse Rich Hancock, MTB’er and recent road convert John Sheasby, and the club’s only 2nd Cat roadie, Wayne Tunnah.

Tony Scopes was first man out, followed by David Silk, who was unable to beat Tony’s time. John Sheasby set the standard with the first sub five minute ride. Steve Blows came close to matching it, but it was 8th man, Joe Finucane, who finally put an end to John’s reign, smashing his time by 22 seconds. Neither of the Richards were able to best Joe’s time with Hancock beating Ostler by 1 second. Tom Yewbury and David Lindsay both posted sub-five minute rides, while Adrian Lancaster just missed out, still, all ones to watch for next year. 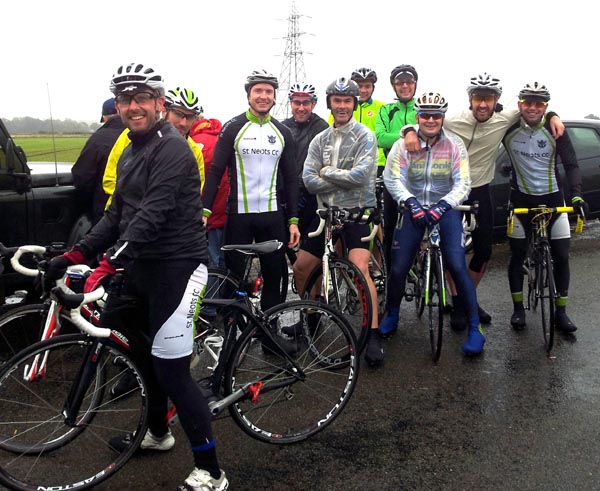 A good competitive race in tough conditions, and with some of the club’s strongest riders in the field, so very well done Joe on his first hill climb victory!

Finally, a special mention to Steve Walker for being the only rider to race in jeggings!

The weather was so wet that only Tony Scopes turned up for the club run, and when no-one else showed, he rode over and competed in the hill climb.