Club ride start time - 08:30 at the Market Square, St Neots. Please note all 3 courses go past Barford Power Station, it is possible to ride past on the pavement and then continue your ride.

A weather forecast for Sunday can be found here

ICE WARNING... If we feel that there will be a frost onthe morning of the ride we will send out an 'Ice Warning' email day before. The ride would then start at 9:30am

On Saturday 28th July a team of four racing in SNCC colours took the start line for what is meant to be one of the fastest courses in the area, although the blustery wind had something to say about this.....as did a pre-race burger for one of the squad! 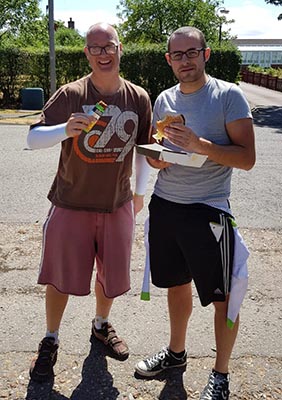 A bonus of the event is the prize for the 'best start', with one of your team perhaps compromising his speed off the line to ensure his disc wheel made the best noise possible......and all to no avail as this was subsequently won by the rider who broke his cleat and had an unhealthy meeting of crossbar and skinsuit.

A quirk of the timing was that whilst the recently crowned national TT Champ was donning a yellow skinsuit to try to preserve his Tour De France lead, the runner up was facing the arguably more difficult challenge of mixing it up with your boys in green, black & white.

Fastest of the SNCC riders was Mark G in a near PB time of 21.24 (28.0mph), identical to his time of a couple of weeks before on the slightly slower course variant for 21st place overall. Also timing similarly to the earlier event were Simon R with a 22.38 (26.5mph) for 35th and Chris G with 23.00 (26.1mph) for 40th place. Dave W found the wind tricky but came home safely in 65th place....although denies he popped back to the drive-thru for a mid-race snack!

The event was won by Harry Tanfield in a new course record of 18.35 which equates to a ridiculous average speed of 32.3mph. Team prize went to Ely & District, with SNCC an unconfirmed 2nd place. Special mention also to Nic P of this parish with 12th place in a time of 20.47 (28.8mph)