The 11.2 mile Abbotsley course was once again host to the 19 week 2013 Time Trial season for St Neots Cycling Club.  As always the course was challenging and demanding and it was great to see 69 members testing themselves on Thursday evenings in all conditions and weathers.

As you will see below the popularity of the event has increased year on year and it is great to see that so many members and guests are prepared to test themselves against the clock. A few members, we know, having being cajoled into taking part are now committed devotees of this event and are spreading the word far and wide. 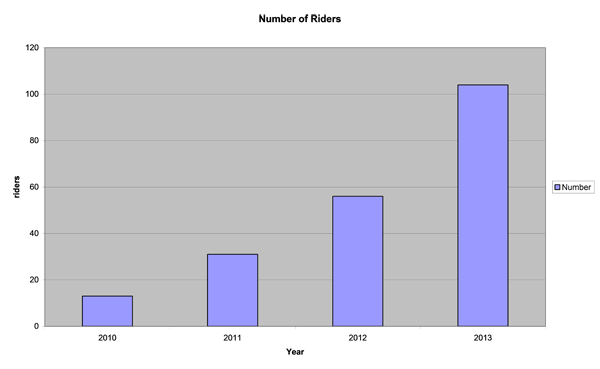 The TTs only work because of the commitment and time dedicated by our Timekeepers and for 2013 a very large thank you to John Brysdon and Colin Mullins . This was Colin’s first year on the clock and he proved an able apprentice to John in learning the dark arts of our handicap system and he has volunteered again for 2014.

John , regrettably , has decided to hand back his stopwatches and wants to spend more time on his bike but we have no doubt he will still be coming over some evenings to see how we are getting on.  Our thanks to John for persevering for all the years when there was maybe only three or four riders turning up for the TT and also for his immaculate recording keeping of all the results.

We welcome Mandy McEvoy , Andy’s wife, as the new apprentice timekeeper for 2014 and she tells us that she is actually looking forward to the experience !! Many thanks to Mandy for volunteering and giving up her Thursday evenings for the Club.

2013  was another interesting season:

The key to winning the Handicap trophy is to be consistent with your times and to keep improving through the season and also to hope that when you have a good time that there is a large field so that you are able to claim a large number of points for that evening.

Mr Consistency was Jon Keefe who kept his wheel in front for almost all the season until hauled back by Gareth Smith who maintained a steady improvement allowing him to overtake Jon at the end of the season. Also in contention were Simon Richardson , Andy Holt and Ade Taverna .

Congratulations to Gareth and good luck to all riders for the 2014 season .

For the Handicap trophy the club uses 25 minutes as the base time for the 11.2 mile circuit. Points are awarded on the basis of how many members take part in each TT. So if 25 riders and 5 are guests then there are 20 points on offer that count towards the Handicap trophy .

For this person their Handicap time for the following week would now be 6 minutes ( 31 less 25) and 6 minutes would be deducted from their actual time and not 7 minutes .

Below is a list of current PBs and Starting Handicap Times for 2014 .