Having had a good season at the NCRA organised Rockingham circuit races, the club decided to affiliate with the NCRA. We were accepted on board, but one of the conditions being that we promote a spring race. So Saturday the 8th of March was our turn, I’m sure it hasn’t escaped anyone’s notice but it was a big day for the club! 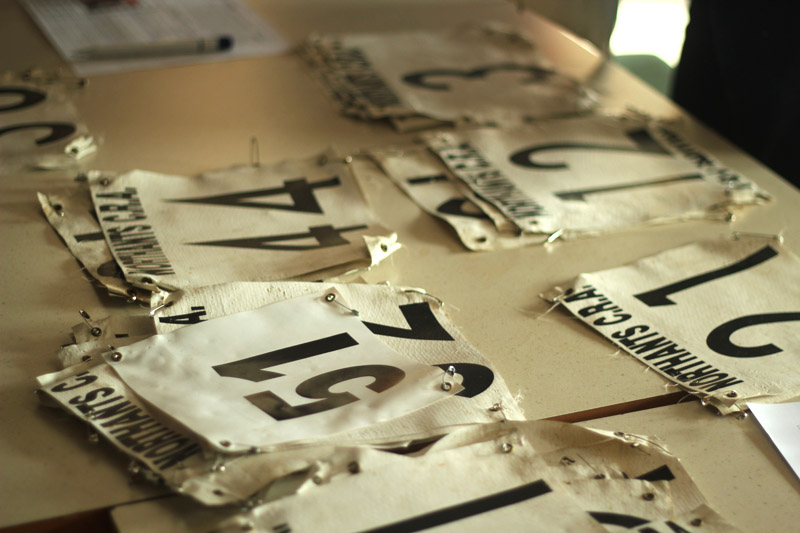 We used the Keysoe circuit, previously used by the 3 Days of Bedford women’s race. The course is a south to north rectangle. Heading southalong the B660 you have the twin lumps/drags/climbs of Keysoe Row and Keysoe. Heading north, the terrain is flatter and fast, but with a few tight bends just in case anyone at the back of a bunch was getting complacent.

60 riders lined up for the staggered start line for 3 laps of the 10 mile circuit – unlike most races, the NCRA ones are handicapped. Women and Juniors ride first followed by two 4th cat groups, 2 more 3rd cat groups and finally the scratch group, made up of 2nd cat riders. It’s a tough race format. Unlike a bunch start, you can’t really hide away in the group. The first groups off have two options. Either work together and try and stay away or take it easy and wait for the faster groups to catch them. The latter sounds like a reasonable strategy until you think about how much stronger those riders are – they’re quite capable of catching then riding straight through. The later groups only have one option if they want to be at the finish line first. Ride hard, ride fast, because that’s the only way to make up the 6 to 12 minutes advantage the lead groups have. And the only way to do that is to work together and cooperate, or else be on the receiving end of some colourful language; there isn’t anywhere to hide (ah, ah, ah!). Better to do your turns and be dropped than suck wheel.

Representing the club were Alan Armstrong (racing for the first time), Joe Finucane, Richard Ostler, Gareth Smith and Wayne Tunnah. Of course, being the hosts, the club had a lot more representation than that. Alec, Adrian Bloxham and David Lindsay were driving the lead cars; Mark Colmer was judging the finish line; John Brysden and Colin Mullins were signing on the riders, Judy and Ruth were managing the food (provided by Tony Scopes) and finally there were all the marshals, too many to list, but every junction was manned to be made safe for the riders. 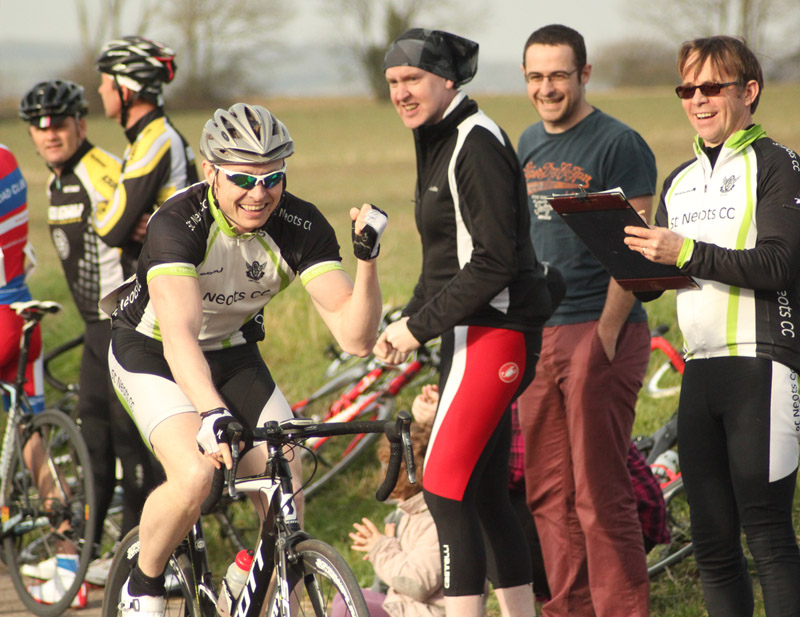 The circuit and especially the strong head wind, faced heading south along the B660, made for a tough race. The last two groups off dropped several of their riders early on, sadly Wayne was among them having cramped on the climbs. What was left caught the 4th group at around the halfway point. Shortly after the lead groups started to come into view, although even from these a few riders had already been passed. Two more disappointments came for the club when Richard was dropped, while a mis-turn on the first lap saw the northern tip of the circuit to Pertenhall cut-off - Gareth was only rider to do the full circuit, but frustratingly put him out of contention. So the fate of the club’s honour rested with the two race newcomers, Joe and Alan.

Onto the final lap and the lead group had thinned down significantly. The 1km sign offered little comfort for the riders. Being at the foot of the Mill Hill climb, by now they would be well aware of what was ahead, and for those aiming for the win, it would be a gruelling, rolling thousand metres. Well, I think for most people in that group that was the case, but not the Irish lad leading them up the drag to Keysoe. In only his second race Joe took a convincing win over a group of experienced 2nd and 3rd cat riders. Alan wasn’t far behind finishing 12th (a promising start). Richard, 30th, Gareth 39th and Wayne DNF, 41 finished.

Overall it was a successful day, we did have a few teething problems, but it’s a long time since the club has done anything quite like this. The first event, no matter how much support you get is always a learning curve, not just for us, but also for the NCRA organisers in inducting a new club in to the fine art of race promotion. Still, time to start thinking about an open now... and I know I’m not the only one who’s thought about a town centre crit...

The view from the Driving Seat, David Lindsay

"This is lead car 1, 2 breakaway riders have just passed the second lap, over" muffled Adrian over the radio...

Driving a race car around our first race in an age was stressful, adrenaline fuelled and really fun!  Particularly when it's something you've not done before.

You get a unique vantage point in a rear view mirror at the front of the race, Adrian and I got to see the entire thing unfold.  The first group that sped off seemed reluctant to work until a younger rider and a strong female decided to break away 1.5 laps in, these set a wicked pace and worked hard for each other - a great sight to behold. Final lap and the younger rider dropped his partner on the rises after the Bushmead cross.  A gutsy ride this far and he just kept going.

Increasing radio chatter altered us to gathering momentum of a 7-9 strong pack that were motoring to catch the dropped rider and the solo male.  For a moment we thought he could just make it but he was gobbled up with about 3k to go.

Then the pace went right up... The climb to the finish I could hear Adrian say

"Joe is in that pack, on the outside, he's looking strong"

Taking the early initiative and powering to the hill he took it. Irrespective of the club that was an impressive show of strength into a headwind up a hill. Phil Gilbert watch out!

Yes there were minor hiccups, yes in hindsight somethings could have been smoothed out but it was a joy to be involved and I'm pretty sure the riders enjoyed the race, spectators had fun and all the volunteers left thinking they had contributed to something that hadn't happened locally for a long time.

Some photos courtesy of Mandy and Andy McEvoy