Several weeks ago I travelled to Alcobendas, a Northern suburb of Madrid, to take part in the European Age Group Standard Distance (10k/40k/5km) Duathlon Championships as a member of Team GB. It has taken me a number of weeks to get round to writing up the experience, mainly because the race itself was such a washout.

I flew into Spain on the Saturday morning, the day before the event, to reduce the time away from home. On arrival I picked up a car, checked into my hotel, registered at race HQ and quickly put my bike together for a short test ride. The weather was glorious but it was pretty obvious from even just a brief ride about that it was not going to be a flat course. After watching a bit of the women's elite race I grabbed dinner at a local Italian with a number of other GB age groupers and hit the hay. So far, so good.

On Sunday, I woke to the sound of heavy rain against the window. The forecast showed further showers all morning and a monster downpour for lunchtime. My race time? 12:05! A quick check of social media showed that the wind and rain swept transition area was already chaotic with athletes for the earlier sprint distance races trying to check-in kit. I figured I'd better get down there. 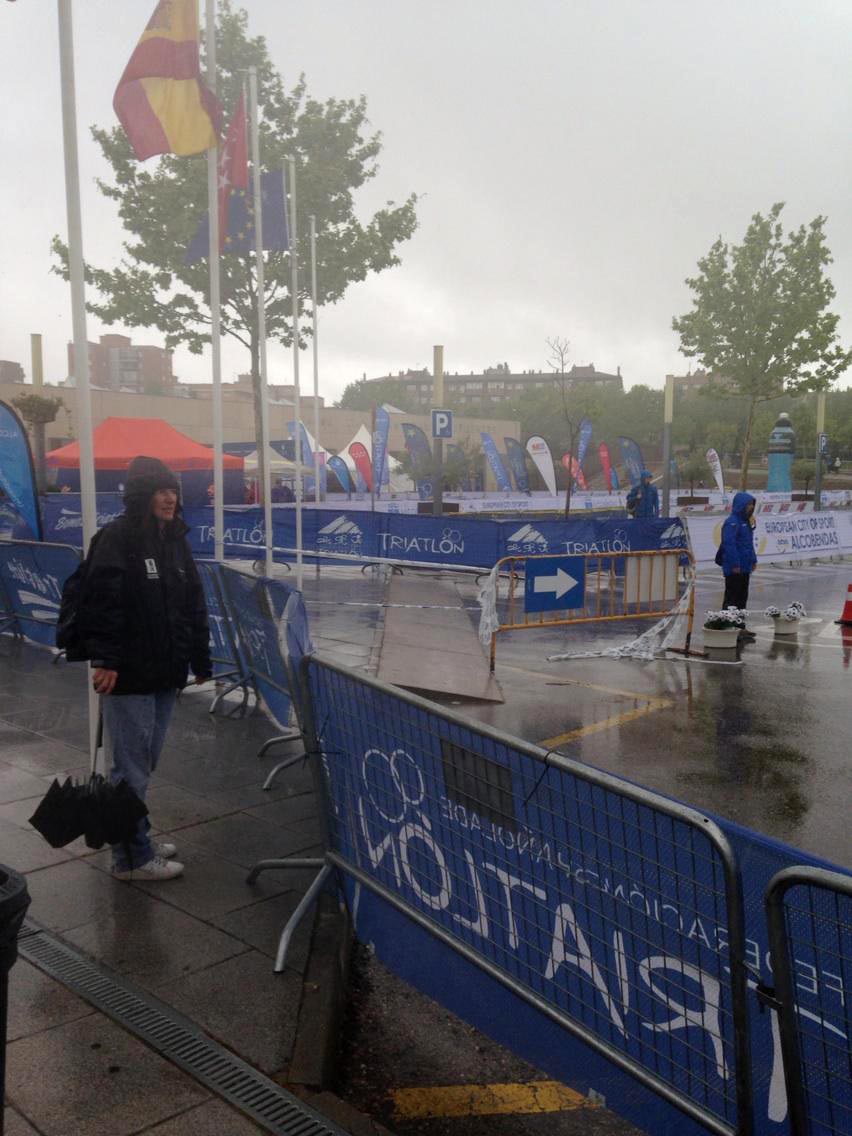 On the way I stopped off to ride the back half of the bike course. It was grim - wet, hilly and exposed. Oh well, same for everyone and possibly more favourable for us Brits. Transition was a shambles - no chips, long lines and more rain. I kept my cool, got my bike racked and set off back to the hotel for breakfast. The rain had stopped and dare I say it, the sky was brightening up.

When I came back to the race area the sprint distance races were reaching their climax. Judging by the amount of roadrash on display it appeared the course was pretty treacherous. I spoke to a few friends, and none were able to reassure me much! I tried to have a snooze in the local leisure centre, eat some Haribo and forget about it.

Soon enough it was time for business. A quick banana, Profile ProStart and a warmup and I was ready for the start. My age group was called forward and we were off. Straight uphill. And yes, it had started to rain again.

The run route was taxing - four laps of three steep hills, both up and down. At least the laps all measured a little short. I went off too hard trying to stick with the front runners. By lap 2, I had found a better rhythm and ran much more sensibly to the finish. The crowds out of the course were great, with lots of support for Team GB, so despite the continued rain it was pretty enjoyable. 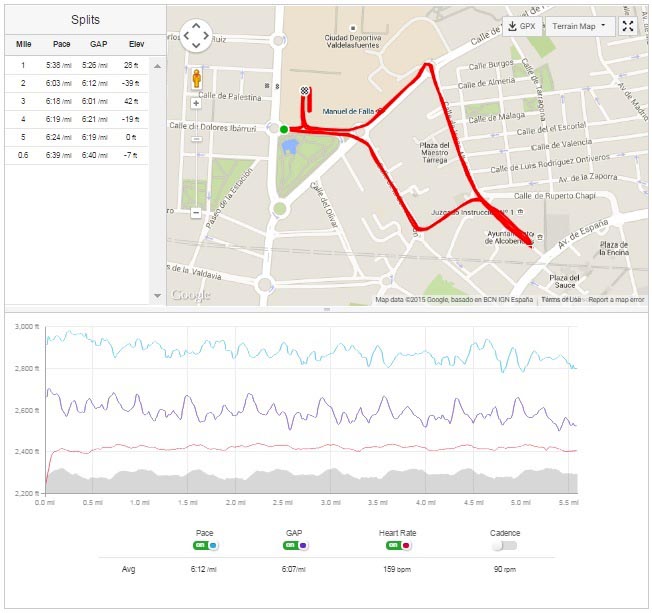 Transition 1 was straightforward enough, although my upturned helmet had filled with water since the morning. As I ran out to the mount line a guy in front of me slipped in his bike shoes wiping out another racer too. I skipped round the wreckage and set off.

The bike course was hideous. 23 miles with more than 90 (ninety) roundabouts or dead turns on the four lap route. Each roundabout featured a raised, painted level crossing on both the entrance and exit - perfect for pedestrian safety, not very helpful for bike racing in greasy wet conditions. Luckily(!) my visor was misted on the inside and drenched on the outside, so I couldn't see a lot anyway. There was also next to no flat - endless repeating fast descents and leg busting climbs. Within the first three miles, I had dropped my chain (amateur shifting error on an uphill) and suffered a cramping calf muscle (probably caused by the cold and hilly run). Either way I battled on. 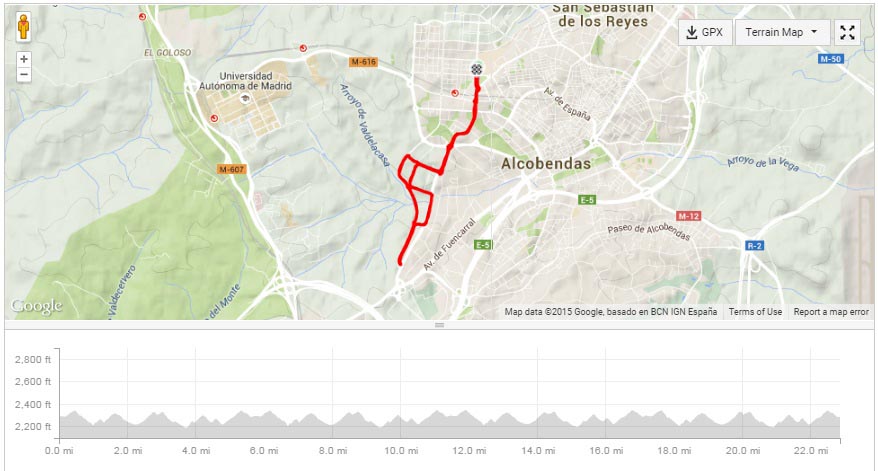 By the start of the third lap the wind had really picked up on the outer reaches of the course. The temperature had dropped noticeably and given that most people were racing in soaked-through sleeveless tri-suits there were a lot of strugglers. I saw several nasty looking crashes with riders unable to brake with cold hands or braking too hard on the slippery crossings. The medics seemed to be doing a roaring trade. All of which made me even more cautious than normal - I picked my way round steadily, focusing on staying upright. My calves were tight, I dropped my chain again and was on the verge of a sense of humour failure as I reached the end of the bike leg.

As soon as I hit transition 2, my spirits were boosted. It was still mighty unpleasant but my running off the bike felt comfortable enough. I also started to pick my way back through the field overtaking racers I should have left behind on the bike. Before long I was pushing up the last hill and descending back into transition for the final time. The finish was pretty anti-climatic. There were still a few hardy supporters out cheering but most, like the event photographers, had long since sought cover.

It transpires I came 9th in my age group. My original A goal had been top 5, my B goal top 10, so I wasn't too disappointed. In fact during the race I'd added a C goal of simply making it round (for once a genuine objective). Many didn't - there were those that crashed, breaking bones or bike parts and those that dropped out suffering from the ill-effects of the cold and rain. 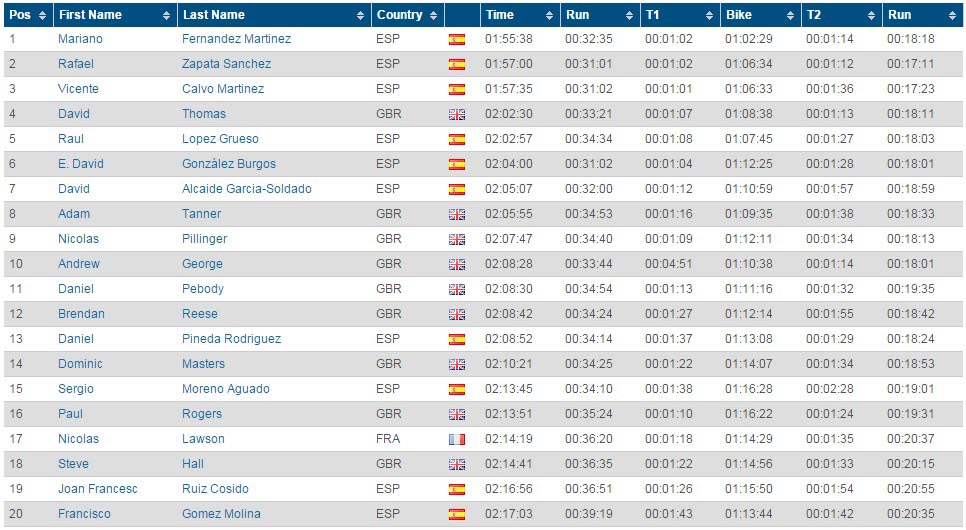 With that, I packed up and made my way home with just enough time for a slack burger and tin of San Miguel at the airport. Meanwhile the Spanish sun burned strong all afternoon. The following day, it appeared that I'd finished as 3rd Brit in my age group - good enough for automatic qualification to next year's European Championships in Germany. So my European Duathlon mission is, to be continued...