18th June and six of SNCC raced Rockingham for the second of this year’s scratch races. Weather was warm and sunny(ish) but immediately from the warm up, the wind made itself known and this blew stiffly down a couple of the circuits slopes, making it evident that any breaks or solos were going to be for the hardmen!

First off were the combined 2nd/3rds with Jake Hennessy, still displaying the scars from his latest hedge related detour and a slightly nervous looking Richard Ostler, who was out to prove a point after the previous weeks event. 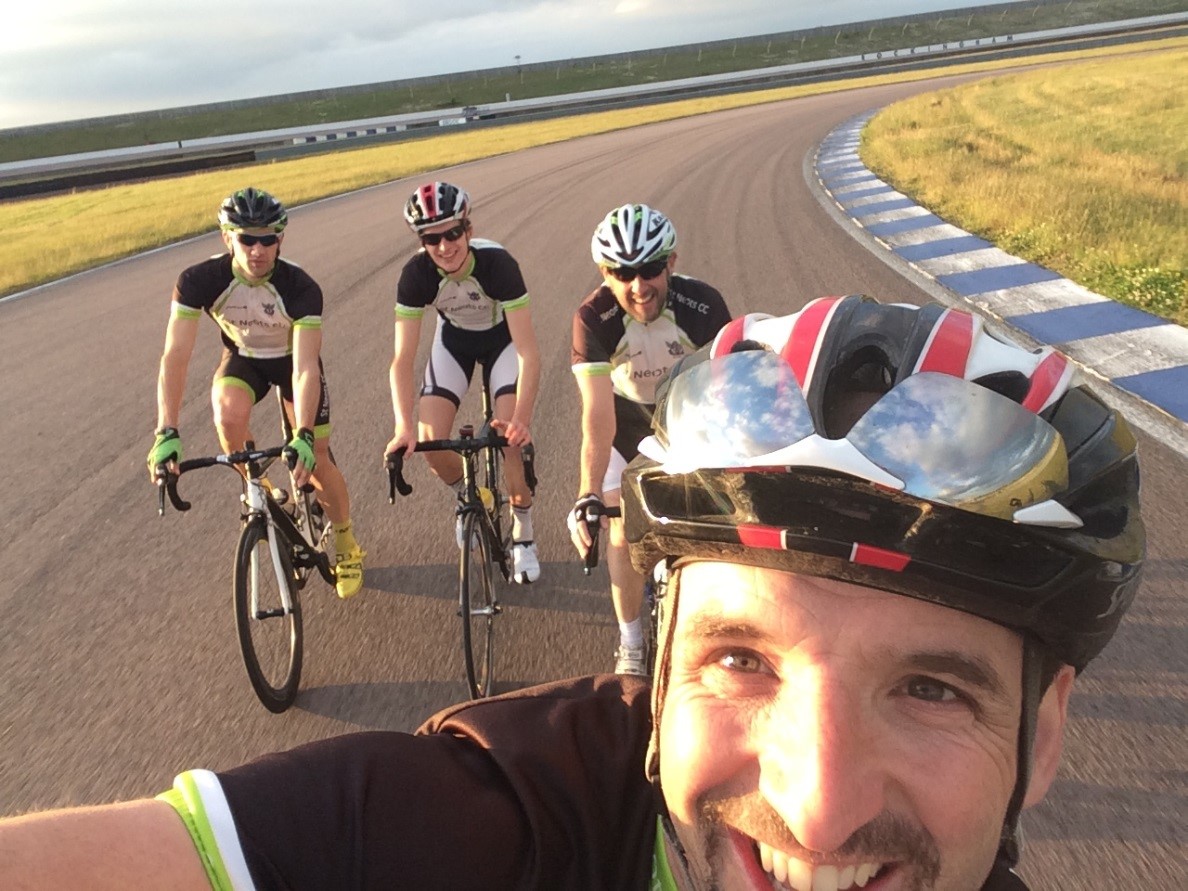 The SNCC 4th Cats smash it off the front in a very relaxed break away…..or not

Our race took off like a bomb (as appears customary) but settled after a few laps into something resembling a normal pace. At one point, the 4 of us were lined out along the side of the pack and briefly looked as if we knew what we were doing. This façade soon disappeared as Kyle (deciding he was cold) decided to smash it off the front to “warm up”, whilst Mike decided to watch events from the rear and both me and Bomber bravely hid in the bunch trying our utmost to avoid the front at all costs, especially into the wind.

Also in the pack were a couple of SNCC “others” Wayne (JPF) and Gareth (PPFJ), both of who were doing a fair bit of work at the front.

The 50 minute mark quickly came and the attacks started as the pace upped with 5 laps to go, all of the attempts at a break were reeled in, and as is usual it was all out for the line. The sprint to the last corner saw both me and Mike conveniently stuck on the inside. Mike used his youth and talent to push forward; I just made a load of noise and weaved around a bit erratically in an effort to get out. Meanwhile Bomber, in stealth made a dash down the inside, Kyle who we can only assume by now had warmed up was near the front on the turn.

Into the sprint and both Mike and Kyle were in the points - Mike in 4th and Kyle in 9th.

As we all made our way back to watch the end of the 2nd/3rds race a 2 man break was a good 200 meters clear and another rider (Jake) just off the front bunch by about 50 meters. As the last laps ticked down, Jake managed to pull further clear of the bunch and with 3 turns to go caught the 2 up the road - although by now the group was closing at a fair rate. Quite how the hell once he’d caught them, he then out sprinted them, I’ve no idea, but he did for a great win. Richard crossed the line in the bunch and looked justifiably pleased considering the pace, ending what was a great night's racing for the club.

A win, a fourth and a 9th…. not bad really for a small club.