As is usual the wind was flat calm everywhere in the East, EXCEPT Rocko, but brilliant sunshine cheered the mood of the team.

Before the start of the race the team were called to mechanical duties and a 4 man chain gang took turns replacing Tom's tyre, the only team member actually not getting involved in said activity being Tom. 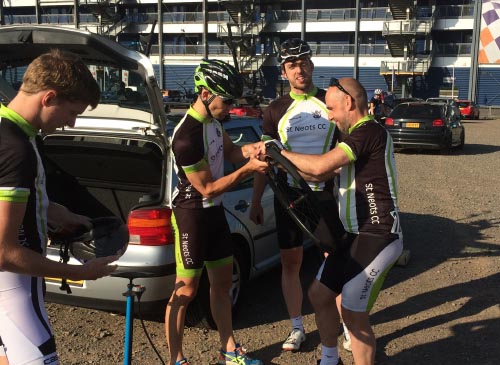 This minor disaster over the next challenge quickly presented itself……. Mike had conveniently left his helmet at home! Some exciting minutes passed and faced with the inevitable, Mike and Chris shot off to a nearby supermarket for a replacement. They arrived back in no time with a fancy Flowery number that was quickly the butt of every joke for the warm up laps, and was kept very closely guarded during signing on, as its far from the look of a 3rd Cat rider, dressed in Castelli!!

The race started and the 4ths out first, I was uncharectoristally confident and had a go from the off, Kyle and Tom in close support, Bomber also in attendance, Chris conspicuous by his lack of presence!

The pace was good and by 3/4s distance it looked like we may stay out, Team SNCC then decided it was time and we had a good go for a lap, but to no avail, all we succeeded in doing being to drag the 4th cats into one long line. Me and Bomber then decided at all cost to avoid the front…..Cue Bomber to then do an epic turn at the front and by the time this was over looked like a man who had!

We got caught just one and a half laps out by the 2nds and 3rds and Richard came past along with Mike in his Flowery He-Man helmet! The pace quickened (as it does) a lot of shouts of “go-go-go” and the race kicked off in earnest.

The track layout was different this week and the blast around the outside circuit and into the 90 degree left was on its own lairy, in a bunch of 50+ it was a bloody amazing, trouser filling experience, and one you had to trust everyone not to mess up! I was on the outside of Tom going into it and renowned as he isn’t for his cornering prowess, I expected the worse, however the newly fitted tyres did the job and it was all out for the line.

The bunch sprint I missed, as I was busy throwing a few f*cks up someone who nearly took me out, but apparently the evening was a great success as all the team finished in the Bunch and Kyle snagged enough points for his Third Cat with a great 7th Place.

Our regular post-race debrief took place in a local health food restaurant and the Mc Flurries, Big Macs and Chips went down well, and plans were laid (again) for next wee'ks campaign.

Watch this space for yet more disappointment and excuses.

Dave “Watch where you are going you di*khead!” Hennessy