SNCC Team at Alconbury Round 2...

Tuesday 18th August saw the Second V.C.C. Chevaliers circuit race at Alconbury. The club turn out was impressive to say the least.

In attendance were Simon “C(o)unt” Rinaldo, Gary “Anyone seen my HRM” Newman, Adrian “Don’t tell Vicki about the wheels” Lancaster, Richard “Road Rash” Ostler, David “What do you mean we all go off at once?” Lindsay, Lee “Swiss army bike” Houghton, Wayne “Fluro is fast” Tunnah, Chris “Anyone got a tube?” Green, Paul “everyone looks fast” Haynes, Mark Mossop and Daniel Grant, I’m sure there were more but I missed them, so apologies if I’ve not named you. 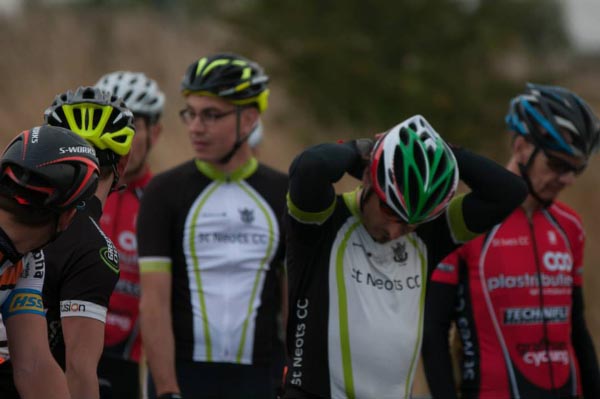 Weather for the evening was best described as cr*p, and as the 2/3’s went off, EVERYONE was eyeing the track. The first laps were taken at a relatively reasonable pace and as the levels of grip were established, the pace started to quicken and as the 4ths watched on cheering like men who really knew this was going to be horrid, the rain increased yet more, sending many of our numbers bravely scurrying back to the van to hide, and to try and find an excuse not to go out. 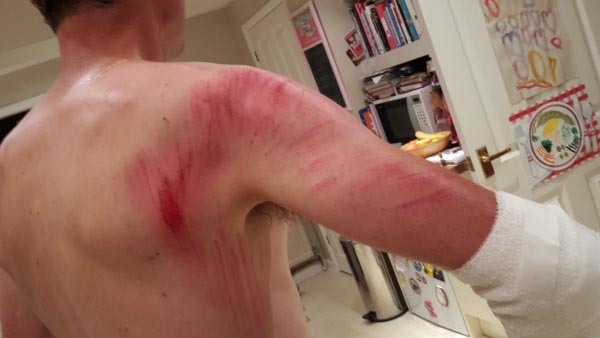 Richard had even resorted to practicing his painting, to remove the pain from his gravel rash!

As the race carried on the pace was set by a Bonito Corse rider and a large number of Corley Drops, along with a few Rhinos up the sharp end. Simon R was well in the running but was obviously holding it back a bit due to the conditions, Richard Ostler WASN’T and was in the thick of it, this manifested itself slightly shortly afterwards, as he threw his bike up the road giving himself a nasty thump and some pretty serious gravel rash….the plus side was that he totalled his rear Campag mech meaning its shifting almost 100% better than it was when he started out in the evening.

Shortly after the C(O)unt was seeing flailing his arms about, which we think meant he’d punctured but as he’s Italian it could have meant anything. 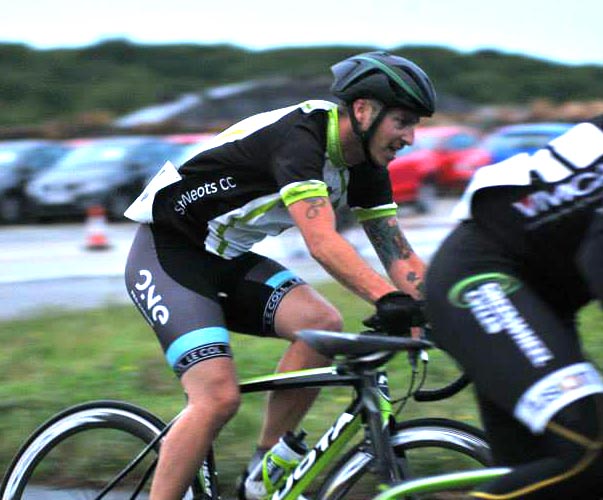 "Now did I pack them 7 spare tubes in my pockets?"

Wayne meanwhile soldiered on and whilst just off the bunch at least made it to the line…many, many others didn’t!!

By the time the 2/3s were done, time and daylight were well against us and in the descending gloom, the rain increased yet more, bringing on a full on tourrettes whine from Mr Newman, who is normally quiet and reserved  in these circumstances. Dave Lindsay had fitted a spare tube after a warm up practice puncture and Lee (taking it dead serious) had even dispensed with the Saddle bags, pump, lights, Saddle bag, TIG welder, tool Kit, Saddle bag, coffee making machine and the spare saddle bag from his bike, as we did a sighting lap the noise of the rain was slightly dampened by Bombers whining about getting his new wheels dirty.

My Race Plan (ha ha) was to just sit in and try and grab a couple of points….I didn’t sit in and as the race went off like a bomb found myself killing it trying to stick in the break, as it was only going to be a quick one I figured I could, and just about did barring a last lap motivational issue.

The attrition rate in the 4ths was as high as the 2/3’s and it wasn’t long before more shouts of encouragement (and abuse from Tim “General” Pennel) increased as more of our number dropped out and did the walk of wearing out cleats back to the carpark. Chris Green was dealt a particularly tough blow 2 laps from the end going out with about the 20th puncture of the night.

Nearing the end of the race it was that hard to see, that glasses were being hurled in all directions and as we finished it was close to dark.

Soaked and Cold we headed back to collect our licences and sort of all bumped into each other, mumbling about rubbish weather, poor light, leg punctures etc etc etc

Paul Haynes on the other hand was buzzing like a man who’d drunk all the Red bull in the world …ever, and for all intents and purposes looked like a man with a serious addiction starting.

The season is close to all but over but it’s REALLY worth kicking your own ass, getting a bit fitter and having a go next year………you’ve got all winter to train, what’s stopping you?