This was a cat 2/3/4 race on a gloriously sunny day and unusually short at 37 miles ... and I was humming ‘Easy like Sunday morning’ as I rumbled up a track into the stubble field that was our HQ. The rational side of my brain quietly pointed out that the quality of the start list suggested it was going to be anything but easy.

As we waited for the Commissaire’s briefing, the chatter was about Nicole Oh (just behind me on the start line) having won the National Masters Circuit Race yesterday. And on my left, a 4th cat, eyes wide at the calibre of riders assembled, was longing for 1 more point to reach 3rd cat.

We rolled up a narrow, twisting lane onto the course and then the race was on. The pace was good and lively as 3 teams tried separately to assert themselves. I held my own. Attacks were frequent, but neutralised quickly and it became clear that a lot of riders were very serious about their chances - and on a mission to make this hard. 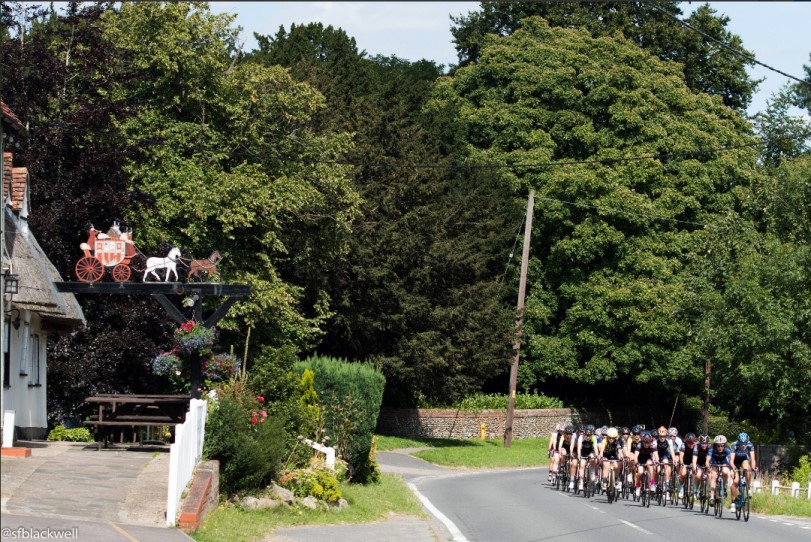 The big attack came only halfway into the race. The bunch exploded, creating a lead group of 15-20 with the rest of us chasing, somewhat broken and never to rejoin. In the end, Lowden (HSS Aprire) won the bunch sprint and in doing so clinched the last few points to reach 1st cat. Oh (Les Filles RT) took 2nd and Nordin (Sunsport Velo) 3rd.

For my chase group, I had a plan for how our race would end. The approach to the finish was a 90o left turn, down to a pinch-point of a bridge with some gravel and then a 300m climb that eased off for another 200m and steepened again for the last 100m. 800m in all, it was a long way out to attack, but I wanted the element of surprise, so that’s what I did. Taking the corner wide and fast, I drove hard into the descent and paced the climbs just right, but Corbett (Les Filles RT) finally showed her class and slid across the line before me. Two big grins. Both of us feeling like heroes. It was a fitting end to a hard race.