12 members enjoyed the best weather yet for our annual pilgrimage to the Yorkshire Dales with the one guarantee of an unrelenting procession of hills, with some topping out with gradients in excess of 20%

After arriving on Friday the tradition is that we take our time and enjoy a 10 mile ride along the Swaledale valley before turning right after Muker and heading up Tan Hill to the highest pub above sea level (1742ft) where most of us enjoyed a pint (or two) looking over the magnificent scenery. There are a few “nasty” inclines on the way up to Tan Hill and Steve , Joe and Jamie left the rest of us behind as they seemed to cruise to the top , however even they had to dig in for the 20% that catches you about a mile from the top.

The ride back to Reeth is always glorious – wind on your back from the Solway Firth and almost all down hill for 14 miles – however close attention must be paid to the lambs deciding that the grass across the road should be tried with no regard for cyclists. 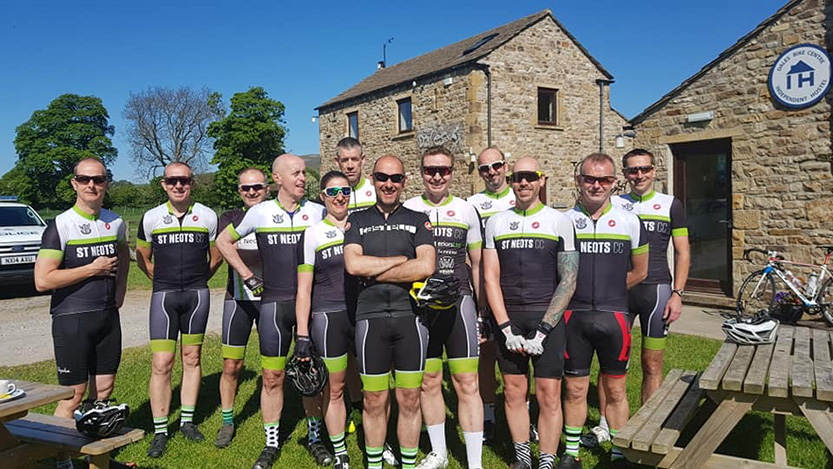 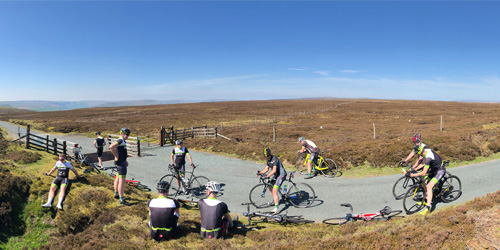 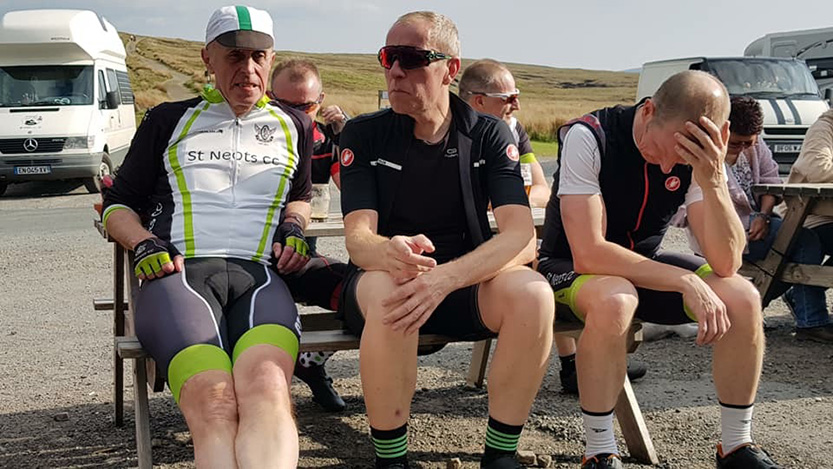 The set up at the bike centre is excellent with an on-site café, which we have 24hr access to and numerous pubs within walking distance. For dinner we chose our normal watering hole, The Bridge at Grinton, where further rehydration took place.

On the Saturday all up bright eyed and bushy tailed with breakfast at 8.30 – the plan was to take in 6 of the steepest and hardest hills in the National Park and many were now wishing that they had persuaded Gary to devise an alternative route, however we were now committed and off we set around 10am.

Over7,000 ft of ascent over 60 miles and within 3 miles of the centre we had turned left up the first climb of the day to Askrigg and once we had warmed the legs up climbing that and a short descent later we were soon heading upwards again climbing Oxnop.

Buttertubs (one of the climbs when the Tour started in Yorkshire, although we went the steep way) was next and like a number of these climbs you see the “false” top and think that you have reached the top only to see the road stretch out again in an upwards direction.

Fleet Moss was the hill that everyone was talking about after the ride especially as you could see the top from the bottom of the valley and it never seemed to get any closer. 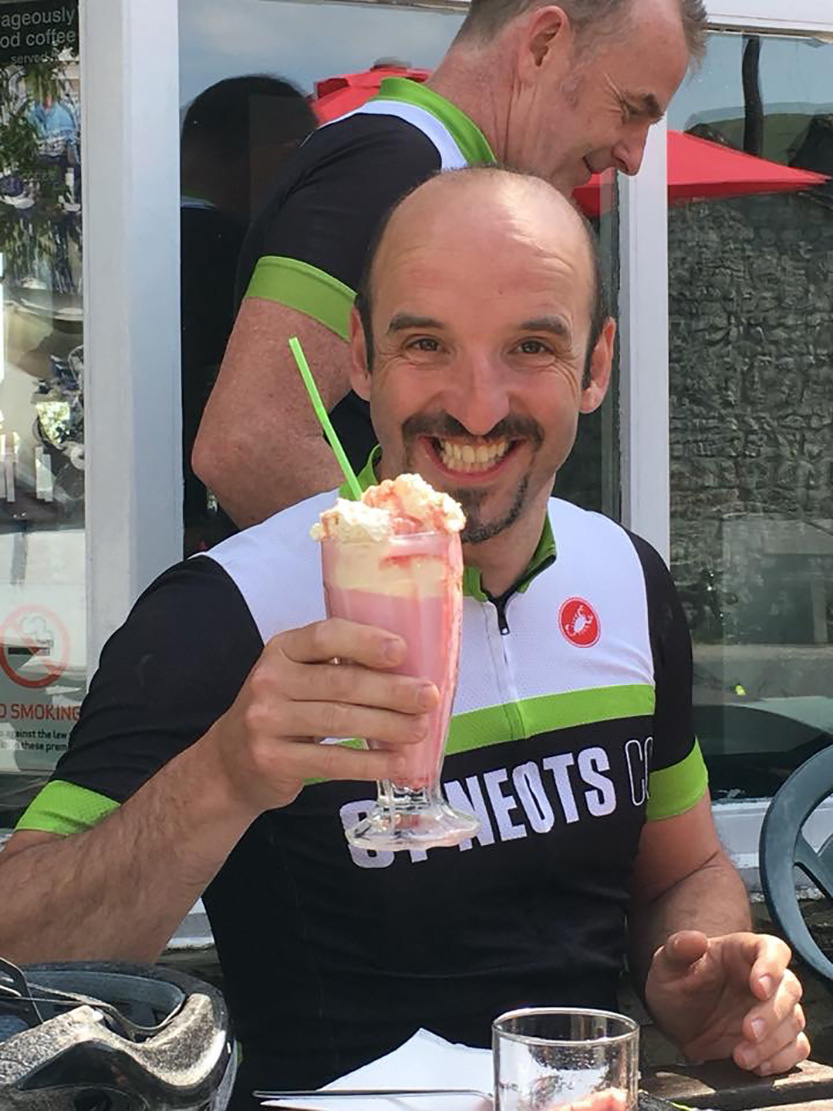 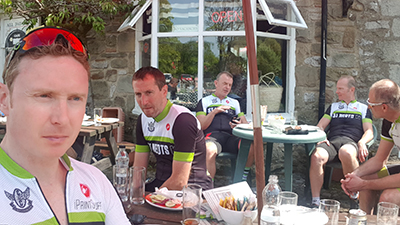 After refreshments in Kettlewell we headed for Park Rash, which starts almost immediately outside Kettlewell and for those who have done it they will remember just how tough the climb is (Tour of Yorkshire included it this year, we also went the hard way up) and although not as prolonged as the other 5 climbs it makes up for it in terms of steepness and by now one or two were regretting even having lunch in Kettlewell.

After Park Rash there remained one final climb to take us back to Reeth and with most of us having done this before we knew what to expect. Unfortunately, Uber don’t operate in the area and we had to finish by bike.

We all rolled back to The Bridge for a very welcome beer, as the heat of the day required hydration began immediately.

Dinner for the evening saw a change to proceedings with a trip into Reeth and a step back in time to the 1950s. Highlight of the evening was a calzone pizza not only stuffed with your standard pizza toppings but also chicken tikka and doner kebab meat.

Sunday saw tired legs and a short 20 mile there and back ride along the valley floor ahead of the event free trip back home to the flatlands.

One last thing before we left was to book the trip for the same weekend next year, where we hope to see some fresh faces grimacing up those climbs

There was also the option of transfering to the dark side. The Dales centre hire E-MTB which with pedal assist. No names as to the 2 culprits who battery powered their way up to here on Friday morning! 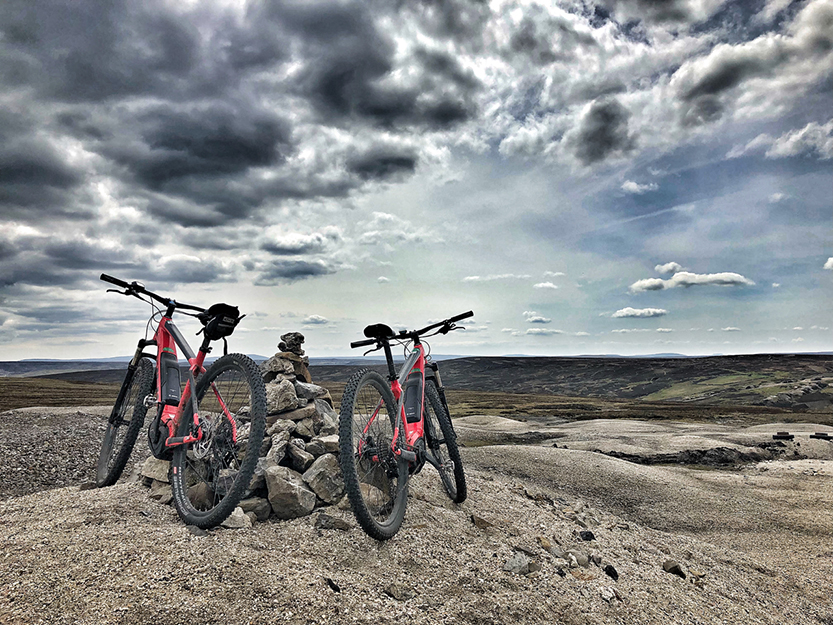