The Annual Dinner was attended by 47 at the St Neots Golf Club on Saturday 16th November and we were delighted that so many members were able to join us to help celebrate what has been a great year for the club. 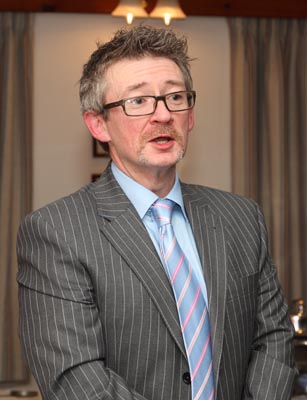 We were welcomed by our Master of Ceremonies, Alistair Henderson, resplendent in those tartan trews who guided us through the evening’s proceedings. In addition to the presentation of the trophies we were entertained by two very insightful and entertaining speeches from Andy McEvoy and Trevor Porter who did not spare anyone in the Club with their comments. As always there was plenty of banter and ripostes from the audience. Richard Ostler, Club Chairman, thanked the outgoing committee and welcomed the new committee for 2014. Thanks to Mark Colmer for organising the Dinner and to Alistair for the engraving and polishing of the trophies.

We raised £220 towards the Phillipines Disaster Fund with Jonathan Pang drawing the raffle tickets. Thanks to all members who contributed prizes for the raffle and who supported the raffle on the night.

The evening drew to a close around 11.30 pm with many still making the Club Run the next morning.

We would like to congratulate all our trophy winners in 2013 as noted below :

This is awarded to the club member achieving the most points over the TT season. Points are awarded based on your handicap time and the number of entries on the night. Gareth won at the last TT of the season securing 182 points during the season 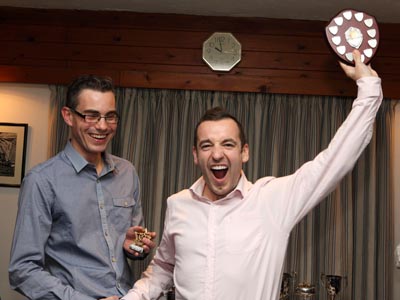 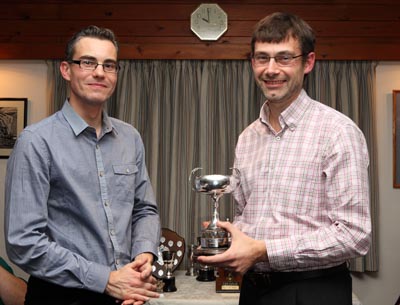 For the club rider with the best handicap time over two laps of the 11.2 mile Abbotsley course. Contested this year by 21 riders and won by new member Chris who posted a PB on his first lap to secure the win. 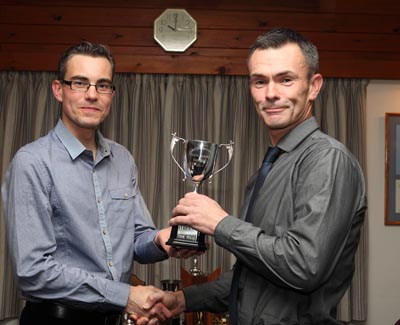 Introduced for the first time this year and a close contest in the end between the old warrior, Richard Hancock, and the young challenger, Tom Stead, with Richard prevailing with a time of 51m 54s

A new trophy for 2013 won by Wayne in his first season of competitive racing and congratulations for moving from Category 4 to Category 2 during over the season.

Clubman of the Year – Andrew McEvoy

The Club has a long history of racing and many of the Club’s Trophies are to recognise the achievement of its members as they compete in open events from 10 to 100 miles. We have trophies for the individual distances but also a number for Best All Rounder (BAR) across all distances.

For the first time in a number of years we are delighted to be able to award trophies for the individual distances and perhaps next year some riders will compete for the BAR trophies as well.

A number of other awards were presented to recognise the non cycling achievements of club members:

Although a few came close none could match Simon for his consistent record of punctures in one day , peaking one weekend with 3 on the Saturday and at least another 3 on the Sunday. Simon wishes to thank club members for their patience and the loan of inner tubes that allowed him to get back home.

Again a few contenders for this award , however none could surpass Steve for his array of splendid cycling tops that brighten up the Market Square every Sunday morning , the over shoes that match the colour on his back fork , the jeggings and of course the £200 Oakley sunglasses.

A one off award to recognise the unstinting devotion between club members. Briefly Wayne had lost the feeling in both feet (due to being severely under-dressed for the weather) and Ade’s solution was to not only massage his feet but to wrap toilet paper around the appendages to restore circulation, hence the award.

Over the Hill Award – Richard Ostler

Racing is tough these days and whilst 37 is hardly over the hill , this year Richard Ostler lost what he thought was rightfully his , having won it for the past 3 years , the Hill Climb Trophy . Pushed into 3rd place the club could not let such a moment pass without some sort of sympathetic comment, hence the award !!

Flowers for the Sportive Feedstation Ladies 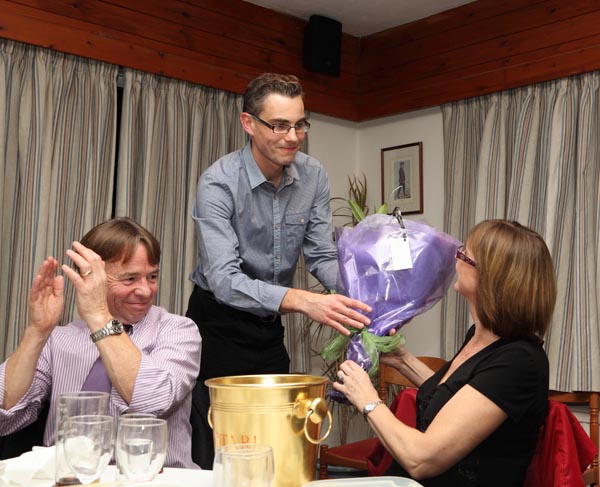 Following this year’s Sportive we received many favourable comments on the quality and quantity available for riders at the two feedstations. Two members wives, Anne Colmer and Mandy McEvoy gave up their respective Sunday’s to run the feedstations and in recognition of this were presented with bouquets of flowers. 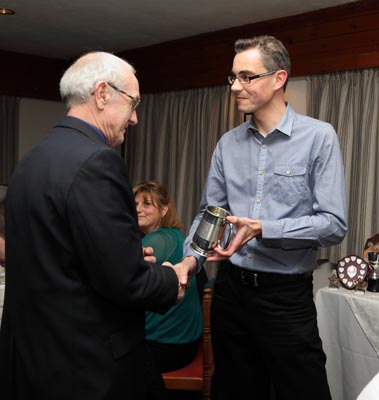 John has been associated with the Club for over 30 years both as a competitive rider and latterly for making sure that our Thursday night TT’s are run correctly. John sets out and collects all the warning signs pre and post the TTs, records the riders, sets the rider off on the night, works out and records all the handicaps and generally has been the reason that we are able to hold our TTs over the past 10 to 15 years. Without his commitment to the Club the TT’s would not have happened and in recognition of this the Club were delighted to present an inscribed pewter mug to express our thanks for all his years of giving to the Club. John is planning more time on his bike next year, however we are sure that he will still be making an appearance at the TTs