The stage was set for THE social event of the season, Limousines had been booked and lycra had been polished as we eagerly anticipated an evening of Prawn Cocktails and silverware. 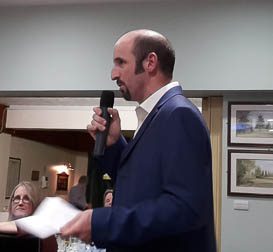 Master of Ceremomies for the evening - David Hennesy

Steve Walker had done a tremendous job of ensuring that numbers would be above those of the previous year and we finished with 71, also it was nice to see a good number of partners in attendance. There was also a slight change to the format with a guess the bike weight competition and the addition of a disco for those owning a pair of dancing shoes, I think we all know who I’m referring to. 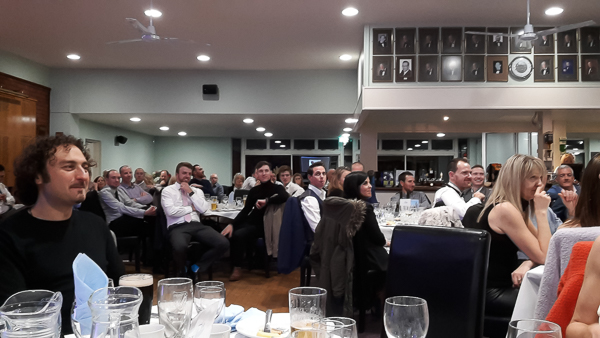 The charity raffle remained as previous years with prizes generously donated by Castelli cafe and local cycle shop Broken Spoke. The raffle proved hugely successful with a profit of £200 being donated to the East Anglian Air Ambulance.

As is now tradition the club stood the first round of the evening.

The meal progressed quickly and efficiently and before long the moment for awarding the trophies had arrived. With the heritage the club has it is no surprise that we have acquired a significant number of trophies over the years, but still we felt the need to add a couple of new ones.

It is testament to how the club has grown in strength over recent history that we now have many more members racing competitively for the club in a multitude of disciplines and a number of club records were broken during the 2015 season.

The serious trophies awarded were: 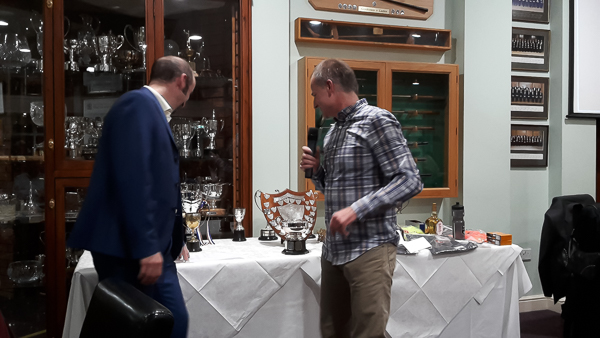 Now, where do we start?

A number of members were unfortunately unavailable to accept their awards on the evening, but there were still plenty to hand out.

Richard Hancock had a tremendous season taking 7 trophies in total and breaking 3 club records in the process, before he wheeled away his wheelbarrow of trophies he gave an emotional speech thanking those who had supported and encouraged his efforts over the year.

Continuing with the TT trophies Adriano Taverna scooped the Veteran BAR and 2-up TT trophy (with Richard) and Ian Turner took the TT30 and the fastest club time on the Abbotsley course with a time of 24:42, both trophies were also new club records.

The club TT was as strongly contested as ever with numbers in the 20’s on most evenings throughout the summer with the eventual winner Chris Green taking the handicap shield. We avoided a winter running of the Ashman trophy this year and Nic Pillinger took the overall fastest time and Richard Broad the handicap.

The clubs road racing trophies are rarer than hen’s teeth at present and we will look to address the balance in 2016 with some planned additions. There was no contest for the winner of the road race points trophy with Jacob Hennessey starting the season as a 4th cat rider amassed enough points to move up to a 1st cat rider, with a total of 311 points.

The hill climb was again taken by Joe Finucane for the third year in a row and a new trophy the hill descent was taken by Mark Greenhow. The final new trophy awarded, which is a reflection of the clubs increasing diversity into other cycling disciplines was the off road performance of the year trophy awarded to Jon Sheasby for finishing high enough to be promoted to the national series of MTB races for 2016.

Finally the awards for clubman of the year and meritorious service went to Simon Richardson and Colin Mullins for their work involved in helping out at various club events throughout the year. 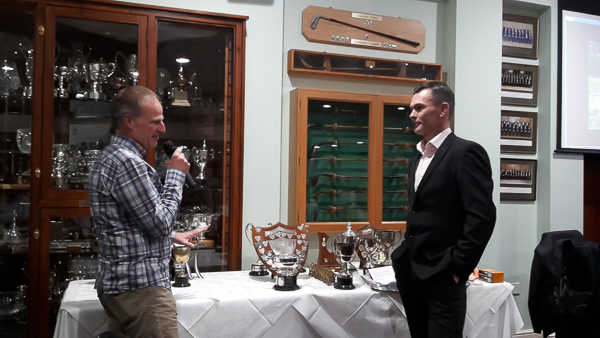 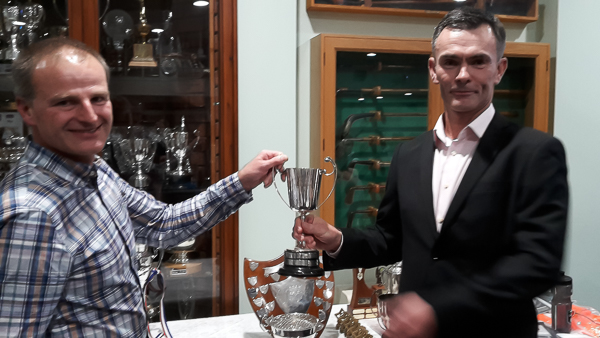 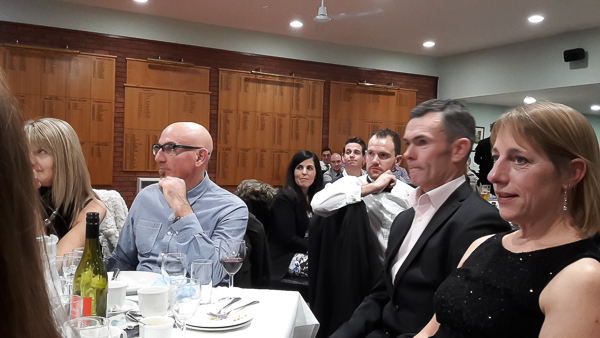 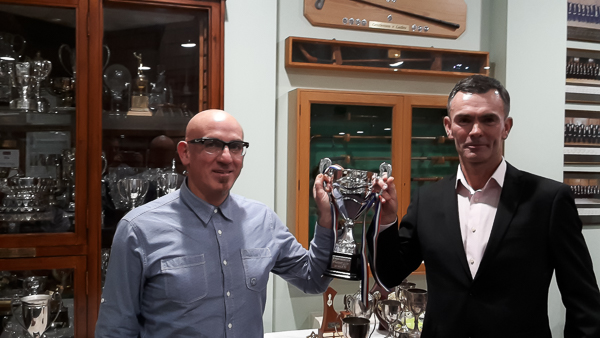 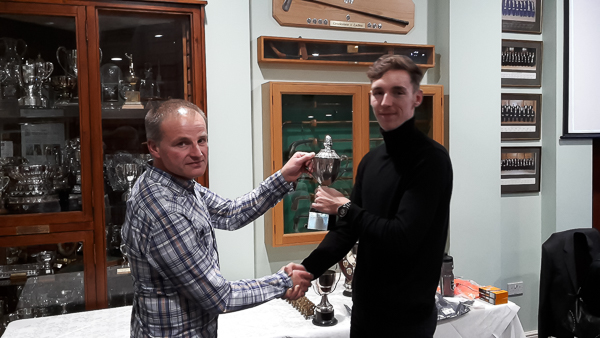 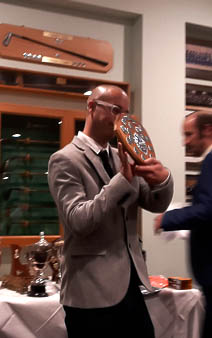 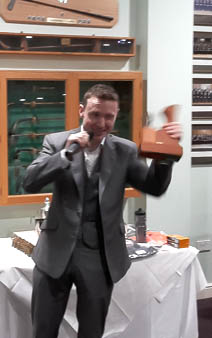 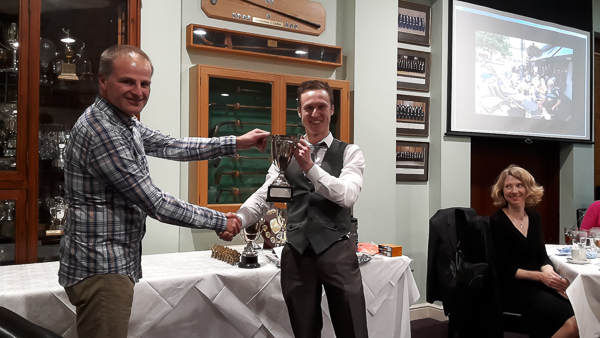 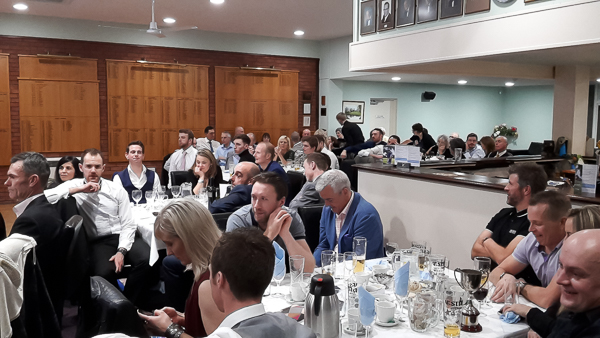 Is it over yet?

2015 was a very successful season for the club with a number of riders moving up the categories in road racing and achieving pb’s in Time Trials, be they open or club events and we look forward to encouraging more members to compete competitively for the club in 2016..

….and so onto the part of the evening where the less than serious trophies were awarded.

I don’t believe that we lost any 2016 members through the awarding of these trophies although there was some debate about worthier recipients for some of the awards.

With all trophies presented the mic was switched off and returned to the DJ as the disco commenced, the dance floor filled up and the queue at the bar swelled.

The evening proved to be a great success and I hope you enjoyed it as much as we did and we hope to see you all and more in 12 months’ time.

The raffle at the Awards Dinner raised £200 for East Anglian Air Ambulane: 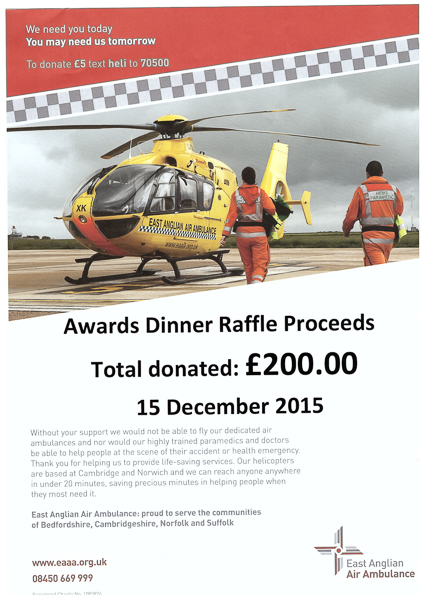