Gareth and Andy H do the Garmin-Sharp Ride Out 2013 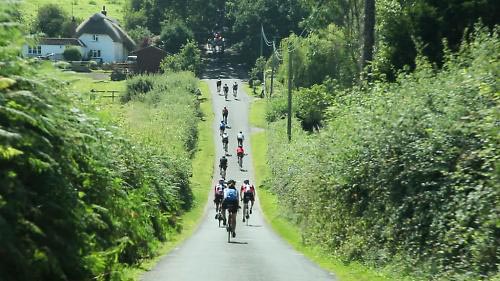 Gareth Smith and I were lucky enough to be selected to take part in the fifth running of the Garmin Sharp Ride Out, a rare opportunity to meet and ride 50 miles around the New Forest with four pro-cycling teams just two days before the start of the Tour of Britain.  The teams represented were Garmin Sharp (Dan Martin, Jack Bauer, Jacob Rathe, Steele von Hoff and Nathan Haas) IG Sigma Sport, (Joe Perrett and Andrew Griffiths), Rapha Condor JLT (Elliott Porter and Ed Laverack) and Madison Genesis (Dean Downing, Ian Bibby and DS Roger Hammond).  Every one of the Garmin Sharp riders was later to feature prominently in the Tour of Britain. 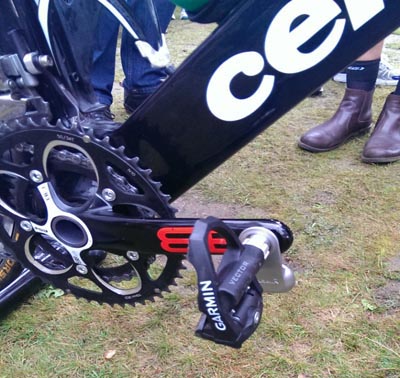 There was an opportunity to get your bike checked by Continental, Shimano, Mavic and other pro-mechanics, or even professionally cleaned by Muc-Off.  We were given a well-stocked goodie bag and the whole event was complimentary; although I think most contributed to the raffle supporting Prostate Cancer, with prizes including a Genesis bike and Garmin Sharp team kit.

The day itself (Friday 13th September) started with a series of workshops covering nutrition, bike maintenance and a talk by cycling journalist and author Chris Sidwell.  There then followed a Q&A session with each of the pros, compered by former Garmin Sharp rider, Dan Lloyd.  This was held in a marquee and we could hear the ominous sound of heavy rain drumming on the roof.  I think the pros were actually keen for once to prolong the session. 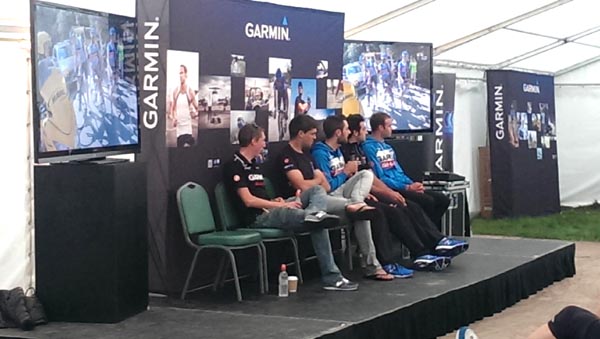 But as the 11 am ride roll-out neared, the rain stopped and the sun broke through.  There were 500 invited riders, including Garmin dealers, journalists and customers and we were to follow a figure of eight course that stretched from Bransgore in the south to Fordingbridge in the north separated by the A31.  It was an area I knew well as I had lived on the northern boundary of the New Forest in the early 70s and it featured part of my first commute - although not cycling.

Hazards en-route would include slippery and gritty road conditions, New Forest ponies, donkeys and cattle and their plentiful output and bone-jarring cattle grids.  The route was well-signed with marshalls manning the key junctions and we were accompanied by service motor cycles bikes and support cars from the National Escort Group, Paramedics, AA, Shimano, Mavic and even theHampshire Constabulary.  There were also a number of photographers dotted around the course to record both the smiles and the grimacing. 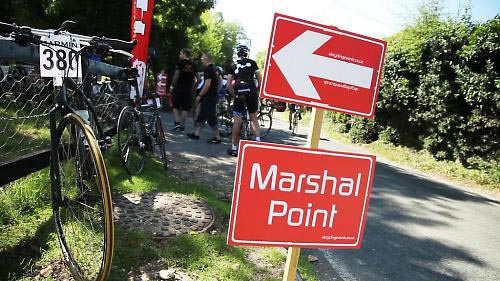 Gareth and I rolled out together in a group of 50 other riders but it wasn’t long before we were separated (actually at the first slight gradient as G forged ahead!)  However, it wasn’t too long before I was greeted ahead by the site of Gareth standing in the verge, resplendent (?) in his distinctive Windy Milla jersey.  He had had a visitation by the p**** fairy.  Problem sorted, we continued together.   It wouldn’t be the Fuji’s only encounter that day though.  Fortunately, Continental was handing out free inner tubes, which would prove useful. 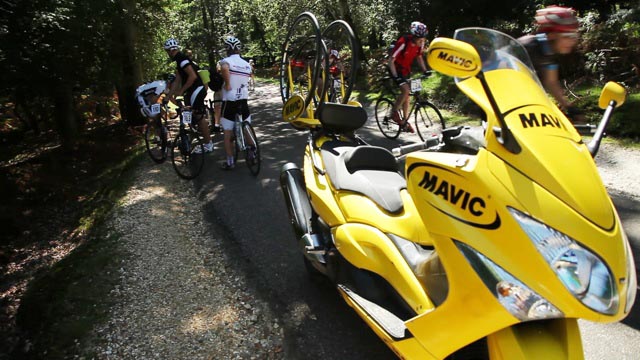 The sun was now out, it was quite hot although also blustery, and we were enjoying the stunning New Forest scenery that varied from open heath land to ancient deciduous woodland.  We passed landmarks including the Rufus Stone, Bolderwood Arboretum, the Royal Oak (one of the smallest pubs in the country) and even the Sandy Balls Holiday Park (formerly a nudist colony, I kid you not!!) en-route.

At roughly the furthest point out came the notorious Blissford Hill, a tricky little climb.  Less than a football pitch long but a slippery 25% incline.  At the briefing we had been specifically requested to refrain from swearing during the ascent as it understandably offended the locals! Gareth ascended without problem and waited for me at the “summit” feed station.  I got my bulk halfway before losing momentum.  I gave one determined push on the pedals but the back wheel went from under me on the wet surface and gravity took over.  Fortunately only minor road rash and slight bike scuffing resulted and not too many witnesses.  I even fully complied, albeit grudgingly, with the “no swearing” request.

After taking on refreshment we turned for base, riding all but the last 5 miles together.  Sadly, we didn’t see any of the pro riders.  I suspect with their value and the ToB looming they were kept well clear of us rank amateurs!   I finished the 50 mile ride at a reasonable 15.7 mph average, Gareth was over 17 mph. 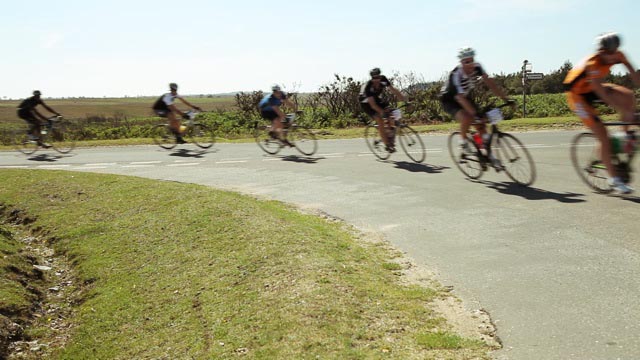 The rain had held off and we both had a very enjoyable day.  Fortunately, being a Garmin event, we had no “navigationals” (unlike 2012 when even the pro-team bus couldn’t find the venue!).

Finally back at base at the Avon Tyrell Outdoor Centre we were treated to a welcome meal before departing.