Eleven is a number that had me smiling to myself as I signed the start list for the Ely Hardriders 25 mile Time Trial on a wet, cold and windy Sunday morning with my son Ben in tow. Why? Because its 10 more team mates than I had the last time I rode this course 10 years or so ago for St Neots Cycling Club.

Back then I had placed 2nd and 3rd in two consecutive years, with a best time of 59.22 I think. So I knew what a tough early season race it could be, and now 10 years older and not a full time tester any more, I knew it would be hard to beat that.

As all the various St Neots CC members turned up it became evident that the conditions had done little to dampen their enthusiasm and after a chat and a bit of banter, we all set about getting ready and warmed up. I wished everyone good luck and set about my own warm up. I felt pretty good and armed with a new front wheel and revised bike position felt optimistic; as the timekeeper counted me down I pushed off hard and was away.

I started nice and steady and built up the speed and rhythm through the small roads at the start of the course with the intention of ramping the pace up at the first turn at about 6 miles. This all went okay and I passed my minute man and pushed hard on the longer, straighter, wider roads . 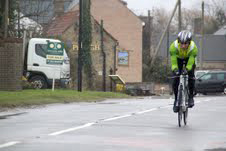 With still no sight of any of the St Neots crew, I pressed on to a long section of road called "100 Foot Drain" at 18 miles and rounding the corner saw Ruth Stapleton in St Neots club strip going well in the distance. This was a very tough section with rain and a strong side wind and a very broken road surface .

I cheered Ruth on as I passed and immediatley saw Ashley Cooper standing punctured by the roadside. He cheered me on and Ruth stopped behind me to help him with a pump. A little further on I passed Gary Wale, a great new member and nice bloke, going well and frightened the life out of him as I cheered him on.

Then it all went wrong. At a junction at 22 miles, the marshal held out his arm to signal the direction to go and to me it looked 100% like follow the road round and not straight on to a minor road. Well, that was a big mistake! He shouted as I passed but then most marshalls cheer you on readily, so I pressed on hard for the now invisible finsh line.

Four miles up the road it became clear when I came to the finish line from the wrong direction that the disaster was complete! At the time I was very unhappy and after being told that five others before me, including Darren, had also gone wrong at the same turn I was properly hacked off.

I fully appreciate that marshals give their time freely, and that ultimately it's your responsibility to know the course, but I think if I'd been the marshal and people were consistently going wrong, I'd have changed the way I was directing. But as I say, it was partly my fault too, so there you go.

So a DNF for me, Darren and Tom Stead. However, a fantastic ride from new member, Ian Turner, who bagged 2nd place in 59:48 which is a very good 25 mph plus ride in those conditions. Ian was about a minute up on me at 22 miles. There was a good 14th place for Chris Ritchie on a new bike, and good rides also from Steve Muchmore in 20th and Gary Wale in 24th and solid rides from Ruth and Ashley in 27th and 29th respectively. Keith Ritchie and Steve Rodley were unable to attend.

So there you go, a varied but successful start to the season for St Neots Cycling Club riders and I can't tell you how good it was to have team mates and a Club feel at a race. There are many more TTs coming up at all distances, mostly on quiet roads, and you should have a go - you will like it .

St Neots CC has a long and proud racing past dating back to the 1930s and earlier.  Just see some of the great names and times on the trophies, with the likes of Ian Cammish and other fantastic riders. Let's continue the tradition. Most of all, though, just enjoy it: there's no pressure and you may love it, so look out on the forum for events, or buy a handbook for £9 from the CTT web site.

Congrats to all who turned out for St Neots CC, and especially to Ian for his fatntastic 59:48 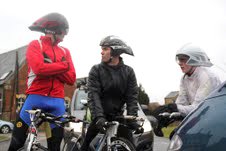