"One can find so many pains when the rain is falling", Steinbeck.

It was not East of Eden in the East of England on Saturday, as Cambridgeshire awoke to grim weather. The BBC were reporting southerly winds of over 20mph in the early part of the day, with heavy rain also forecast. We had been warned, however, that this was not a day for excuses, and there was a strong turnout from St Neots CC at Huntingdon Racecourse for the Wiggle No Excuses event, with members meeting near the registration area shortly after 8am.

We arrived to find that some excuses had been made, however, and UK Cycling Events had elected to cancel the 80-mile Epic ride due to the adverse weather conditions. The 40-mile Standard ride was still going ahead as planned. This seemed a curious decision, as presumably the weather was going to be the same for both rides, and there was a mixture of disappointment and irritation at the cancellation. There was no question that the weather was pretty grim, though, and in the end most people seemed happy to have ridden the Standard route.

Shortly after 8am, a group of St Neots CC riders including Alasdair and Alistair, Andy Mc, Andy H, Gareth, Mark, Trevor, Steve R, Steve L and Wayne set out on the road, passing Jason Gadd as he arrived for registration. As the ride was a sportive, not a club run, individuals were looking for the best time they could achieve on the day, and that, together with ride traffic on the climb to Grafham Village, caused the group to splinter early on. By the time the group reached West Perry, Adrian Lancaster had bridged, but we had lost some members off the back. The early section of the ride headed south to Little Staughton into a southerly headwind so vicious that riders were glancing behind to see who was holding onto their seatpost. Spring Hill offered a degree of shelter from the storm, and Andy Mc danced up the climb like a man who'd sprinkled more than sugar on his porridge that morning. The route turned west toward Thurleigh and the eternal joy of crosswinds, splintering the group further near Riseley, where Wayne decided to stretch his legs and pinch the town sign from Adrian, who looked suitably nonchalant about the whole thing. The feed station was bypassed, and no doubt there was a surplus of flapjacks on Saturday evening, as a result of the Epic cancellation.

At Swineshead, the route headed north-east, giving us a slight tailwind to Kimbolton school, before turning south-east into the wind again. Wayne stayed on the Kimbolton Road, heading back to St Neots directly, while the riders heading back to Huntingdon enjoyed the short, sharp climb at Agden Spinney. Passing riders who were just starting their ride made the climb to West Perry particularly satisfying, the envy etched on their faces producing a warm glow that pushed out all thoughts of the cold wind. The promised rain showers finally chased us down the descent from Grafham to Brampton, but the scent of a good time and a hot cup of tea was now in our nostrils, pulling us home like Bisto kids, with Adrian dragging Andy Mc and Alasdair Higgins along. As we stashed our bikes and hunted for tea and coffee, other St Neots CC riders started to arrive, and we retired to the warmth of the registration area to share stories of our exploits on the road, and of exploits yet to come.

The number of St Neots CC riders earning a "Gold" time for the event was into double figures, with strong rides from all, particularly given the weather conditions. Ian Turner recorded a superb 2:02, the 5th fastest of the event. A huge well done to everyone taking part.

Notwithstanding the disappointment over the cancellation of the Epic ride, there was only positive feedback for the organisation and facilities provided by UK Cycling Events. The route was well-signed and well-designed and the timing standards were just the right side of challenging. The free tea and coffee at the end was particularly well-received, though I'm still not entirely sure why there was a miniature tube of toothpaste in our Wiggle swag bags? 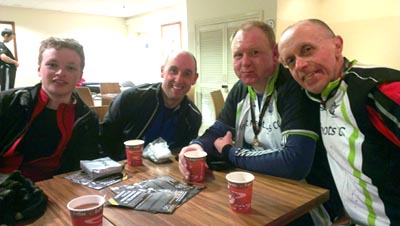