Steve P has entered an IronMan triathlon and we have been following his training.  Read how he recently scouted the course:

On Friday evening 14th June, Steve and his IronMan team mates Simon and Mike drove the 4 hours to Bolton, home of Peter Kay, in order to get a feel for the UK IronMan course.  Spending the night in the De Vere Whites hotel at the Reebok stadium which is the base for the IronMan event in August, we were up at the crack of dawn to get to the Pennington Flash country park where the IronMan starts with the 3.8km swim in the lake.  Donning the wetsuits, we joined a school of other IronMan tadpoles for a 2km training swim around the buoys in the lake at Pennington Country Park.

Drying off and getting changed into our cycling kit in the car park to simulate the first transition (T1), we then set off on the cycle route.

Unfamiliar with the route, we were really fortunate to hook up with Andy and Phil who are also doing the IronMan, had just completed their swim and actually lived on the cycle course.  They took us the initial 14 miles north to the village of Adlington and the start of the 33 mile loop centred on Chorley which has to be completed 3 times.  Here is where I found out that Lancashire isn’t Cambridgeshire…….there are hills in Lancashire!

Almost immediately into the loop, just after the dam dividing the Rivington Reservoir, the route climbs steeply up the infamous Sheep House Lane.  After a complete circuit, which included a number of “getting lost” detours, we decided to get some additional hill climbing training on Sheep House Lane before heading back to the cars at Pennington.

Back at the cars, it was another quick (T2) change into the running kit for a 5km “brick” run to practise getting the legs used to running off the bike. Despite the time and logistic constraints of the day, we managed to get some valuable training in all three elements of the IronMan.  We clocked up 80 miles in the saddle over about five and half hours and with an elevation gain of 5,525 feet.  More importantly we got a great physiological boost by getting to know the IronMan course.

After burning a couple of thousand calories, we treated themselves to naughty McDonalds before setting off on the long journey back to the flat fens of Cambridgeshire.

The next scheduled training event for the trio is the Cowman half IronMan in July. 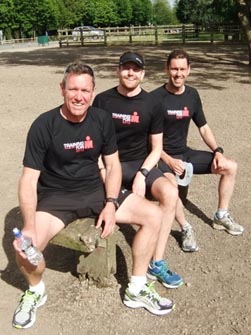 Steve, Simon and Mike after the final run