After riding to St Neot and back last year and a short trip to the Brecon Beacons in July I thought it would be fun to think of another foolish challenge to raise money and awareness for the good work of Parkinson’s UK. I completed the Pyrenean Raid a few years ago and amongst the group were two friends who had ridden from St David’s to Lowestoft - the widest UK C2C ride at around 400 miles. I was not enthused about Lowestoft (no disrespect meant!) so decided instead to ride to St David’s and back again – Saints 2021 was born…

Norman King offered to ride the first day with me and as Richard and Andi Saw (and Nell the dog) had very kindly agreed to be support crew, Norman rode to Chepstow with me, getting a lift back with them at the end of day one. We had a tail wind and after a few spots of drizzle around Old Warden the weather was kind. We had scheduled stops at Woodstock and Malmesbury (nostalgia for the LWL controls?) and added quick stops at Kingswood and Lechlade, both of which were very welcome. We made excellent progress and were even slightly ahead of schedule reaching our glamourous stop at Malmesbury BP petrol station. Then things started to slightly unravel and somehow, we lost an hour. As we reached the cycle path to the Severn Bridge just before dusk, we were greeted by a big fat CLOSED notice, but went to the M48 and saw it was in fact open, finally got over the bridge (woo hoo welcome to Wales!) but Norman picked up a puncture from some broken glass with about 3km to go. I pedalled on and Norman walked the rest of the way. After a challenging time trying to find Richard and Andi and the B&B (Chepstow town centre has been somewhat pedestrianised post-COVID) finally we all met up, Norman’s bike was packed away and the crew drove back to St Neots. Still in cycling kit, I went off in search of food and stumbled upon an open Chinese take-away. I got chatting to a group of friends also waiting for their dinner, after they commented that “you look dressed up for a Saturday night”. They turned out to be on a trip with Crystal Seas scuba diving company from Norwich. They had a whip round and very generously donated £50!

Day two dawned cold but clear as I headed west towards the coast. After scrambling over the Brecon’s (recommend the canal café and onto the canal path just outside Brecon) the course had me (and about a million motorbikes) on the A40. There was allegedly a bike path when the A40 becomes a dual carriageway at Carmarthen, but this petered out before St Clears so it was back to going cross country. At some point west of Ffairfach (and a lovely stop for a vegan GF muffin) I saw a road race go past in the other direction. This will be one of the stages of the 2021 Tour of Britain, so I was treated to some newly laid tarmac for a few miles. After St Clears the roads got quieter and I continued on my way to Haverfordwest. After another battle with Garmin / Apple Maps I finally found my B&B for the next two nights and a relative rest day for day three the loop to St David’s and back.

After a hearty breakfast and some extra treats from my B&B host who is also a cyclist, I had a relatively straightforward if lumpy ride to St David’s and the sea. I took the Sustrans route 4 out which saw me climbing (and then descending) quite a few 15+% hills. I got to the cathedral and rather than mooch round town I carried on to the coast, having to push the bike for the last mile or so along a footpath through a field that was full of sheep! I then retraced my steps and returned to the St David’s visitor centre for a spot of lunch and the ride back into Haverfordwest.

I set off slightly later than planned after repacking all my luggage, and retraced my steps back to St. Clears, managed to find an open petrol station which was lucky as Wales was basically shut today. Once again, I spent the day avoiding the A40, criss-crossing it several times but thankfully not on it for very long. North of Brecon and with the English border almost in sight (well not quite) I stopped at Cradoc Golf Club for a very warm welcome and much needed caffeine. Then the last push to Hay on Wye and over the border into England [do a happy dance]. Although I had had a headwind all day, it seemed to drop a bit now, the land flattened out somewhat and I made slightly better progress for the last 30km or so, eventually arriving in Hereford at around 9pm. This time the B&B was easy to find, although my room was in the house next door! Shower, food, sleep and onwards for day five.

A nice start through the Cathedral Close and the statue of Elgar and I arrived in Ledbury for breakfast at the lovely independent Sunrise café. Suitably fortified, I tackled the Malvern Hills and made my way through the Cotswolds to Broadway for my next stop. Avoiding Banbury, Bicester and Oxford, I crossed the M40 and was now back on familiar territory. I was due to meet Norman at Finmere at 5pm so he could coax me home. I had left a little later than planned (again) so was hoping to find a bit of time somewhere which never happened. I was desperate for some proper food and after meeting we stopped at every available looking spot, eventually finding a friendly pub and co-op in Deanshanger. Norman tried to keep my spirits up with some jokes and banter and we eventually made it to Olney, at which point I knew I would make it. My knees were getting pretty sore from all the climbing, but things start to flatten out and the roads are all familiar from that point on. For some reason I had us on the A421 after Olney, instead of going through Lavendon but we soon found ourselves in Thurleigh and 10 miles to go. Pat came to meet us on Bushmead Road; it’s all downhill from there! There was a lovely welcome waiting for me from Richard, Andi, Monty and Frances in Market Square and a welcome glass of fizz was pushed into my hand!

A huge thank you to Norman for riding with me and to Richard and Andi for being an excellent support crew!

I must also mention my trusty Titanium steed, Princess Fiona, and of course Mark at Broken Spoke for building her up for me and making sure everything was mechanically sound for my trip!

Thank you to everyone who has sponsored me so far and for all your kind words of support. There’s still time to donate at www.virginmoneygiving.com/Crazy_Lady (or look for Charlotte Lawson’s Cycling Challenge). 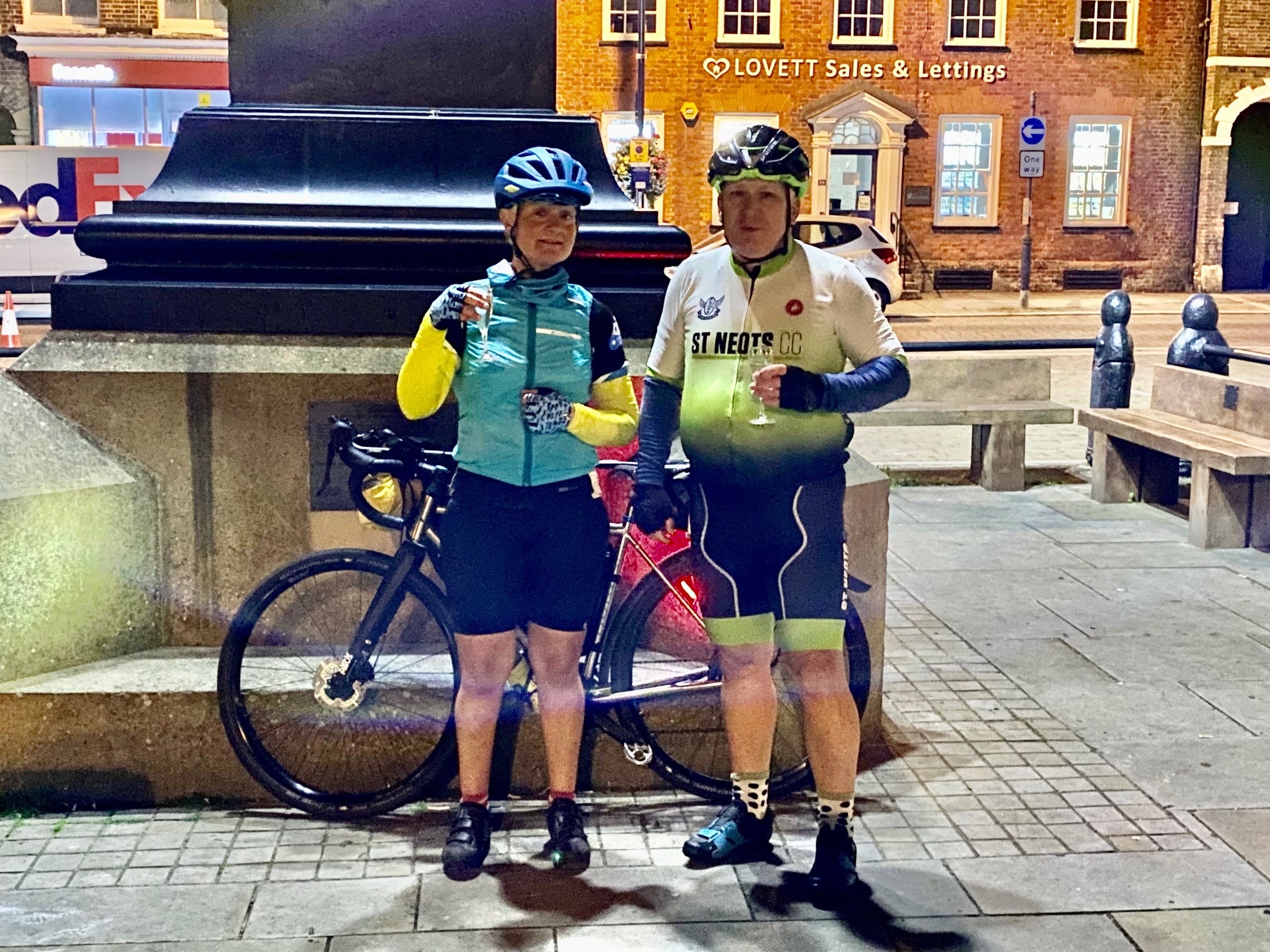