April 18th once again saw the SNCC Race team descend upon the Old Circuit at Walgrave. The club was one the best represented on the day, demonstrating that we are now fielding ever growing numbers of enthusiastic racers, and truly are now seen as a club with a race pedigree. 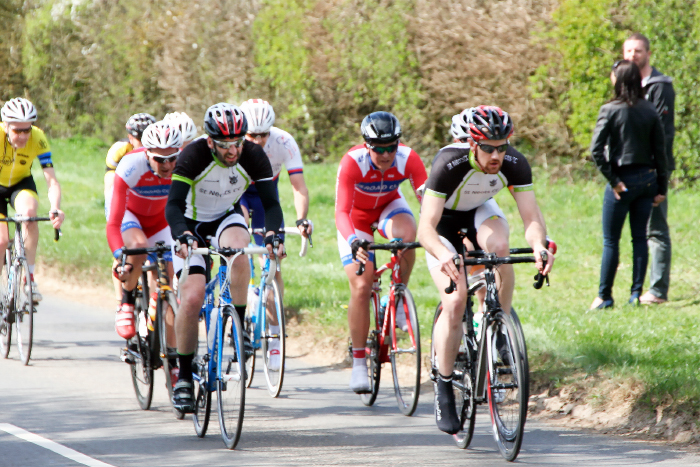 Dave and Ed in the bunch

Once again the wind was going to play its part, and the first straight away from the start saw it blowing straight down our throats.

If you ever want to take the kids out kite flying….book it when there is an NCRA race, without fail it blows a hooligan.

Dan Baxter, must have bribed someone and looked suitably sheepish as he left in the first Group. Myself, Gareth Smith (a former SNCC member traitorously riding in another teams colours) and Ed Porteus left in the 2nd group, Richard Ostler was in the 3rd, a very pleased Joe had seen himself moved forward along with David Palmer, who was still struggling with the hangover of flu, finally Jake Hennessy started in scratch along with Wayne Tunnah (again in other team's colours), some 12 minutes down.

From the go the first group were never going to stay out, and despite Ed’s enthusiasm I suspected we wouldn’t either. Sure enough by half way through lap 2 (I think) we caught Dan's group, a few strangled “jump on” were hurled and we kept rolling. Half way around lap 3 we were caught by David’s and Joe's group, who had also swallowed up another group, and again a load of shouts and hollers as we latched onto their shirt tails. Richard,  with a few others riders, had only just missed out bridging onto the back of the group.

Now well into the final lap the pace quickened as with the wind on our backs every effort was made by 40 + strong group to get as far up the road from scratch as we could. We needn’t have worried as they weren’t working well and with Jake smashing them to bits they weren’t realistically going to catch.

The finish at Old is a bit of a “lively affair” a downhill run seeing the bikes hit around 70+kmh, this runs over a bridge, which funnels the group and the uphill (nice!) sprint for the line then occurs.

This is dodgy enough, without some moron in a car deciding that he couldn’t wait for 2 mins and heading straight towards the bunch. The following chaos saw a frantic effort for everyone to get out of said car's way. During this Joe, Ed and Dan were in exactly in the right place and as the pack opened up all three made it over the line, Ed a brilliant 3rd, Joe 7th and Dan 8th. 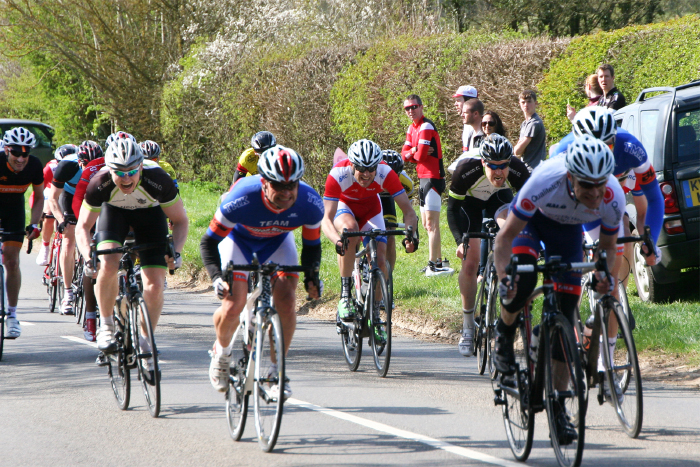 Joe and Dan with their race faces on

An equal record crowd of supporters (one) Tom Dunkley were on hand to photo the action and so impressed was he, that we have another member signed up for the final road race round on the 25th April.

Great to see so many White, Green and Black in the bunch!