It was great to see 30 riders ready to contest the final TT of the 2015 season and many are already looking forward to the 2016 season and picking out bikes and frames that will allow them to find those extra few seconds and secure more PB’s.

Chris Green was anointed as the 2015 Handicap winner with a final points tally of 225. Rumour has it that Chris cancelled all his holidays until the end of the season to ensure that he would remain in contention for the Trophy, and his commitment has certainly paid off by not missing any of the races. A great effort in his first season with the Club. Chris opened the season with a 33:30 and ended the season with a PB of 28:59 an improvement of 4:31. Congratulations also to Simon and Nic who finished second and third with points totals that would have won the Trophy in previous years. 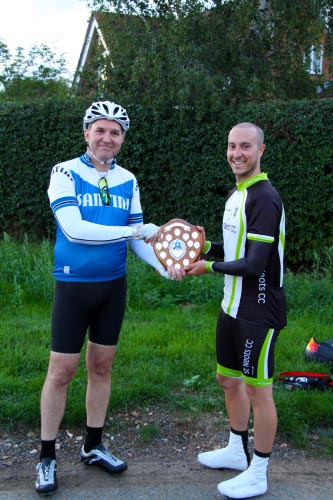 The Club awards a trophy for the Fastest TT in the season by a club member and this was won again by Ian Turner with a time of 24:42. Of Ian’s 6 TTs on the full course, three of his times were sub-25 minutes and his average time for the 6 TTs was 24:59. Given that in the past 5 years no club rider has gone under 25 minutes at the club TT this is a great set of times and congratulations to Ian for once again posting the fastest time in the season. Ed Porteus was also sub-25 minutes during the season with a 24:45.

The testing 11.2 mile course does not yield any easy PBs and on the night there were only two PBs from the 20 club riders with Rob Moir and George Lendrum taking 53 seconds and 17 seconds from their respective PBs. George claims that the bright yellow skinsuit he wore for the first time did not have any impact on his improved time - however many reckon it must have worth at least 10 seconds!

Only one second was the difference between first and second fastest on the night with Luke edging just ahead of Ian with a 25:52. 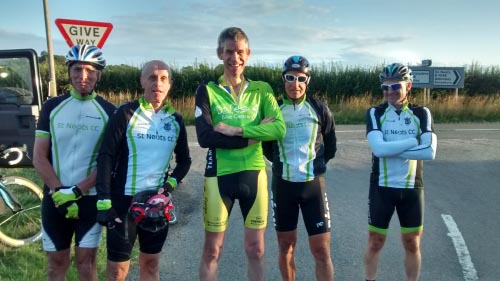 Over-50s on the night: new addition is Gary Newman by a week

To allow us all to enjoy the TT and to take part involves a lot of work in the background to make it happen including:

We need, as always, to give our special thanks to Mandy and Colin who faithfully turn up each week as timekeepers to ensure that we can all ride. They do not have the option of thinking it is too windy or too wet so I will not race tonight. They are always there and without them we would not have our TT.

Our additional thanks to Mandy for the provision of post race tea, coffee and cake which has been an excellent addition to the evening and noticeable that Mark Greenhow and Darren Preston were at the TT but chose not to ride but only eat cake!

Additional thanks to Simon, Richard, Alistair and Alec.

So as one season ends we now need to contemplate the next 34 weeks until the start of the 2016 season and hopefully many will take advantage of the spinning classes starting on Thursday 1st October to help prepare for next year.

Handicap Trophy on the night