The route was changed at the last minute due to roadworks and we found ourselves on a flattish triangle with two descents and two uphill drags. It all seemed straightforward until lap 2 when the rain became torrential.

Now the course consisted of running water, standing water, plus stretches of tarmac that I could actually see. There was as much spray coming up off the road as there was rain coming down. Grit in my eyes and on my teeth and shoes full of water. My brakes became as effective as a chocolate teapot, which is never good news on a bike and in a fast-moving bunch, it ups the stakes somewhat. At times I felt like I was swimming because there was as much water going into my mouth as there was air and I swear I could hear waves breaking too. 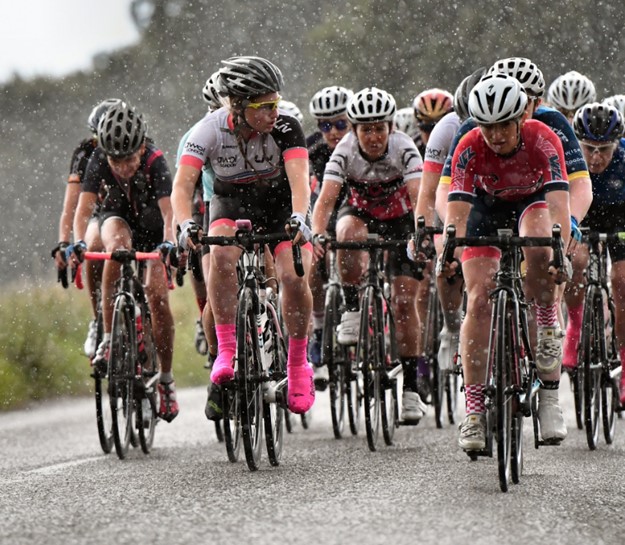 Photo: front of the race with Jane in 2nd row, behind the Liv rider. (Photo courtesy of John Lloyd)

On it went. There were a few attacks, but nothing serious until half-way through the race, by which time the rain had stopped, the pace went up and things got very tough for a while. I held on. Then another attack and another long chase with the bunch stringing out, heads down and legs burning in a war of attrition. Still I held on.

CC London had come with a plan. In the penultimate lap, one of their riders (Cutts) slipped away as her team mates did what they could to deter a chase. Coley (1st cat) waited until the bell lap to launch her attack and bridged across to Cutts, who managed to beat her by a wheel-length on the line.

The bunch came in just behind and I placed 12th - in the points, wearing Norfolk’s finest road grime like a badge of honour and exhilarated because of it. Epic race!