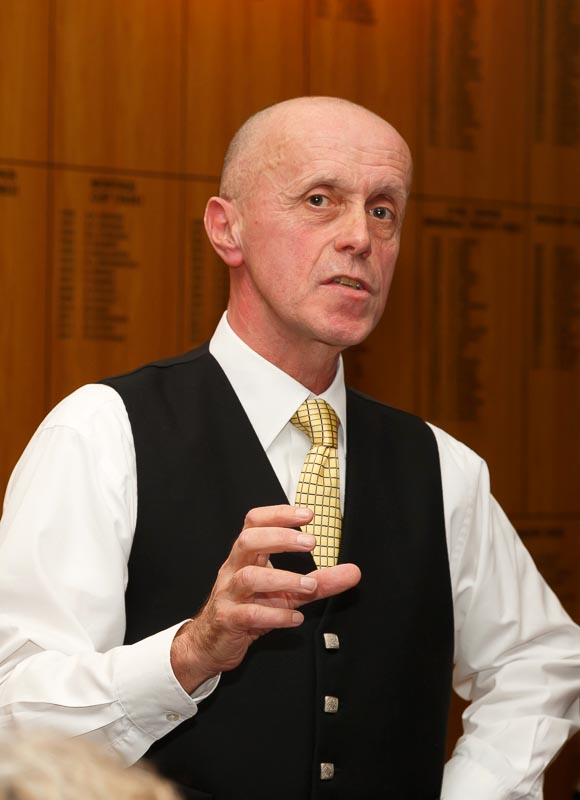 Sixty-one members and guests were in attendance for the Club’s Annual Dinner and Awards at the St Neots Golf Club on Friday 28th November to celebrate another good year for our Club and to award trophies for individual performances throughout the year. It was good to see so many of our partners attending and it was also good that some of our younger members were able to make it. The age range on the night was from 19 to 68.

Members were entertained by a continuous loop of photographs on a large screen illustrating the Club’s year, with photos not only from the Club’s UK year but also taken on members' exploits in France, Spain and Italy. This certainly brought back some memories and thanks to all those who submitted photos, and to Tim Pennell for creating the montage. Lots of thanks also to Tim for organising the excellent dinner.

During the evening, the various tables were asked to complete a picture quiz of celebrities who have been photographed riding bikes which caused some debate and confusion with only one table getting 100%. Also, to exercise the mind, Richard Ostler prepared 20 cycling related anagrams, so it was very easy to see how Richard passes the time when he is on the train to London!

Our thanks to OBP Cycles, Broken Spoke, Grafham Cycles and Castelli for their generous donation of raffle prizes which allowed us to raise £268 for charity. The proceeds will be split between Magpas and East Anglian Air Ambulance. 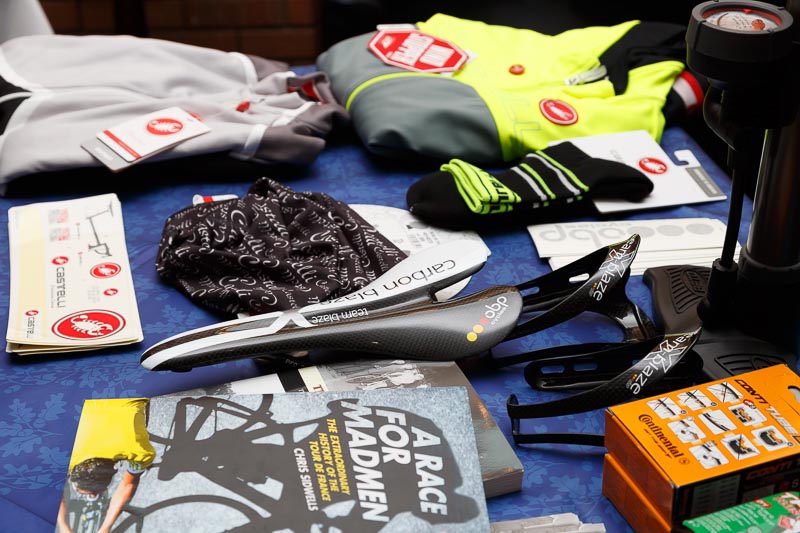 Before moving onto the presentation of the Club Trophies the Club wished to recognise and acknowledge some of the non cycling achievements of members during 2014 and these are noted below: 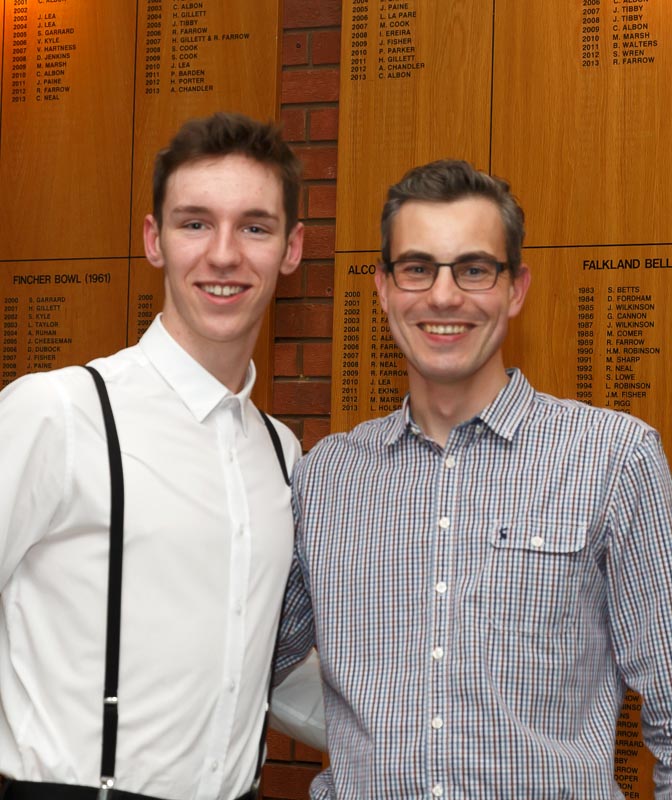 Fashion Award: Steve Walker’s jeggings were once again a contender for this prestigious award, however it was felt that Jacob Hennessey’s bravery and fortitude in wearing an all pink outfit on the recent trip to Woburn could not be beaten. The bravery continued when he was seen to order a beer in the pub afterwards whilst his fellow club members tried to disown him!

Hardman of the Year: Richard Broad who was involved in a Club run crash in August did not realise that he had been injured and took the lead to get the group home despite later having to attend hospital to find out that he had broken his arm. Chapeau. 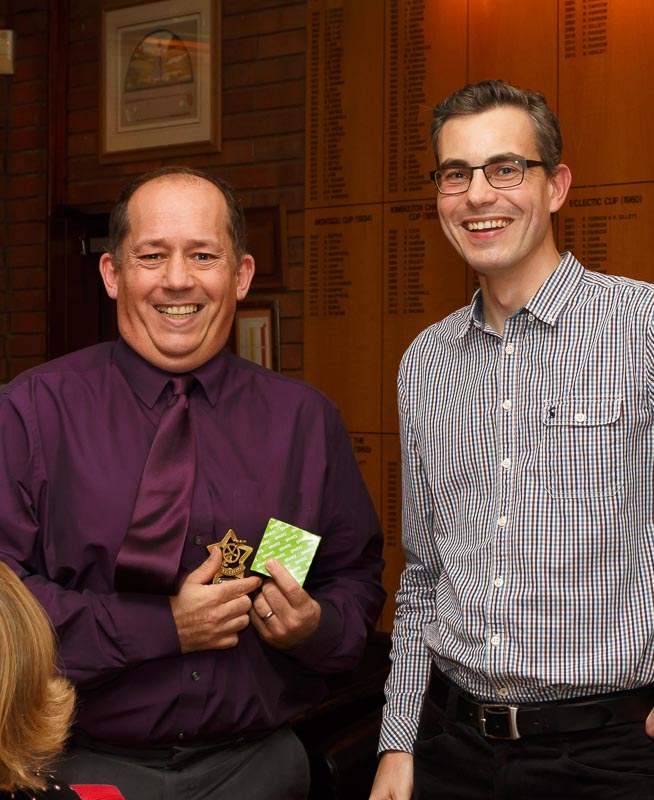 Club Runs Start at 8.30: On many occasions this year a lone rider has often caught up with the Club run at distances varying from 5 to 30 miles. This is not an attempt to ride solo but an inability to reach the Market Square by 8.30am on a Sunday morning. Jon Keefe was presented with an alarm clock and an award to help remind him of the start time.

Spinning Class Fall – One would have thought that reputations would be preserved with the fairly innocuous activity of spinning on a bike within a sports centre. However one club member, with a decent cycling pedigree, managed to fall off said bike and it is only proper that the Club should acknowledge David Hennessey’s achievement!

The Club Handicap TT series begins at the end of April and runs for 18 consecutive Thursday evenings. Our Timekeepers are essential in allowing club members to take part and enjoy these competitive evenings testing ourselves against the 11.2 mile Abbotsley course. Our thanks to Colin Mullins and to Mandy MacEvoy for all their dedication and assistance this year to make sure that others could compete. Colin was presented with a bottle of whisky and Mandy was presented with flowers at the Ashman Handicap event on 7th December as she was unable to make the Dinner. 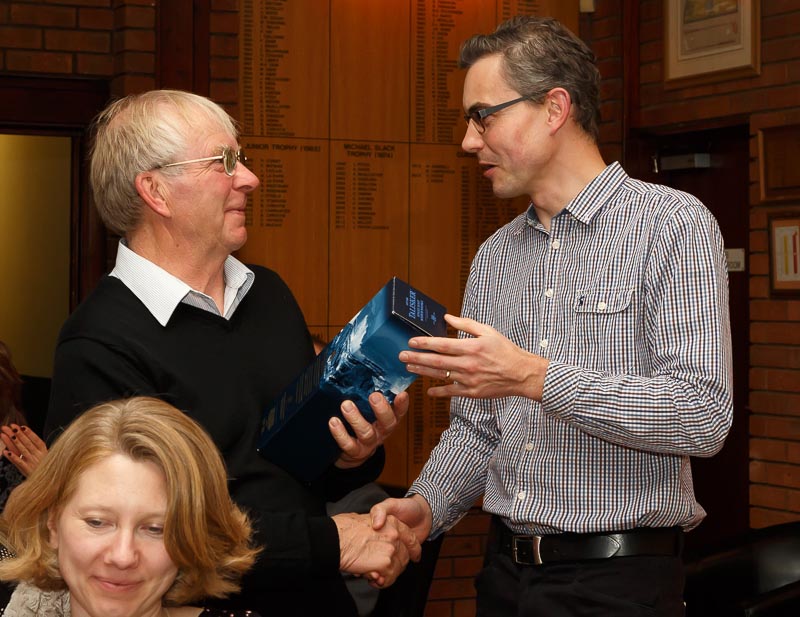 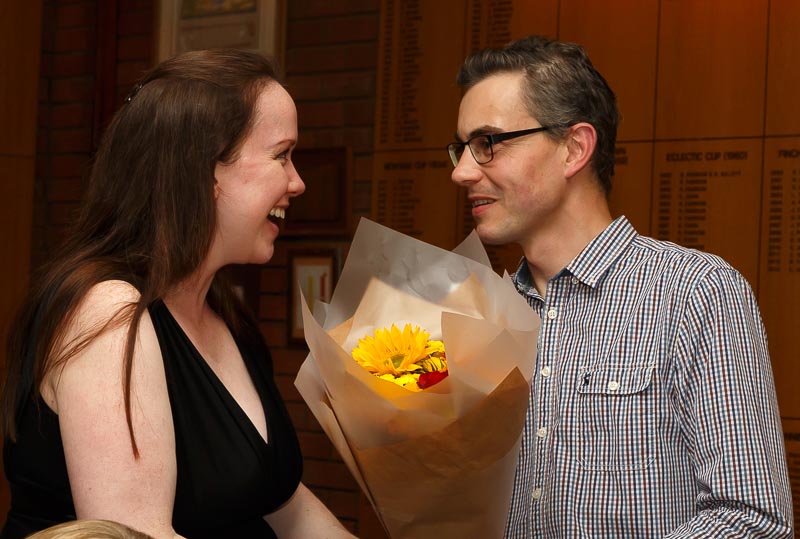 Our thanks to Colin Mullins and to Mandy MacEvoy for all their dedication and assistance this year to make sure that others could compete. Colin was presented with a bottle of whisky and Mandy was presented with flowers at the Ashman Handicap event on 7th December as she was unable to make the Dinner. Leah Phillis, a member’s wife, came to watch the Sportive on 5th October and volunteered to help with the registration process as we had over a hundred on the line entries to process in a short period of time. The Club acknowledged this valuable help with a bouquet of flowers. 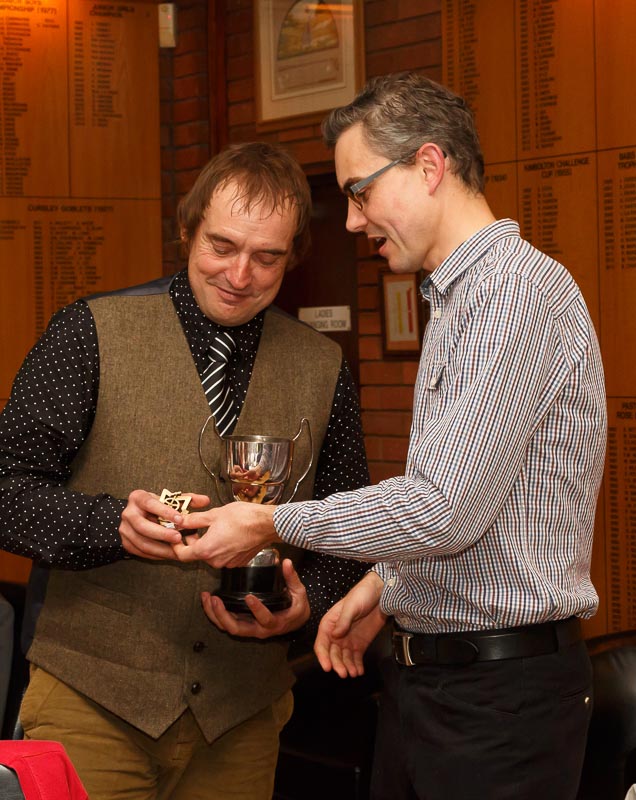 R D Hall for Meritorious Service: This year the winner was Terry Davies who has been very active in ensuring that momentum has been maintained and focussed in the Club’s Go Ride programme during 2014. 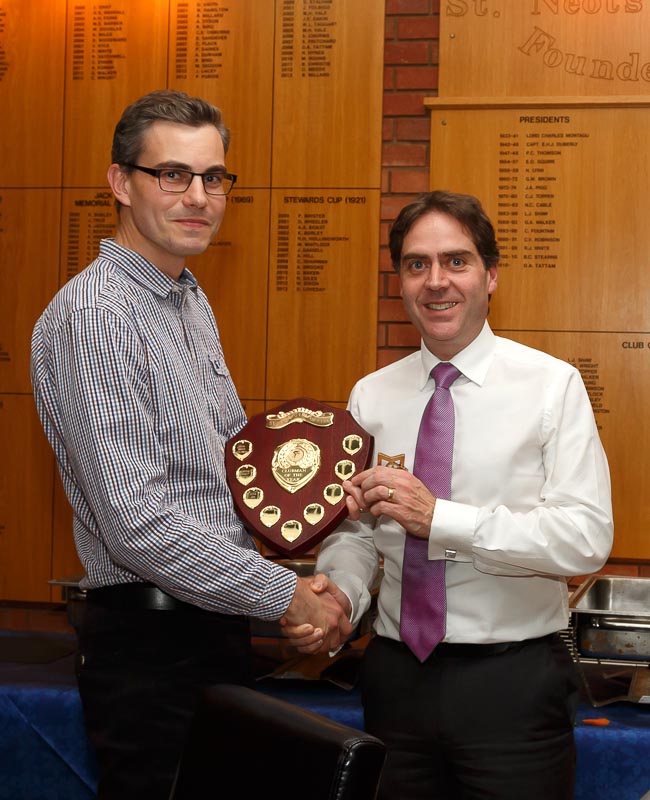 Clubman of the Year: Following in the footsteps of Mark Colmer from 2012 and Andy McEvoy from 2013, Ian Burroughs was the winner for all his work and help with the Club’s kit orders and Sportive

We then moved onto the presentation of the various club trophies. The Club has a number of trophies that date back many decades and many have remained uncontested especially when the club membership went into decline between 1999 and 2010. It is very encouraging to be able to award these trophies once again and also to be reminded from the times recorded on the trophies just how strong the racing pedigree was in the St Neots Cycling Club. 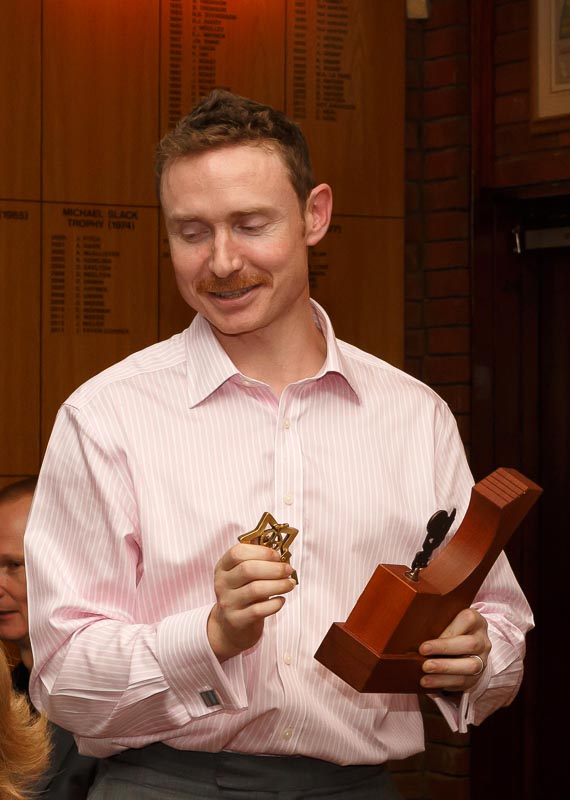 Hill Climb: Just as well this took place before Joe’s broken arm when mountain biking at Woburn as he was able to retain his place as King of the Hill Climb for 2014 following his success in 2013. 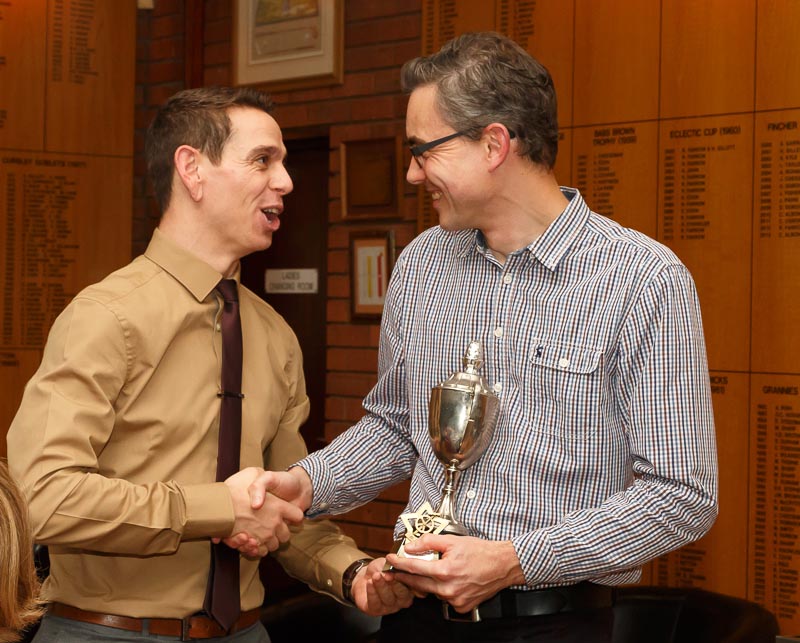 British Cycling Points Winner : Good to see the Club having more involvement in BCF events and as in 2013 it was Wayne Tunnah who collected the most points in the 2014 season to allow him to reclaim the trophy. 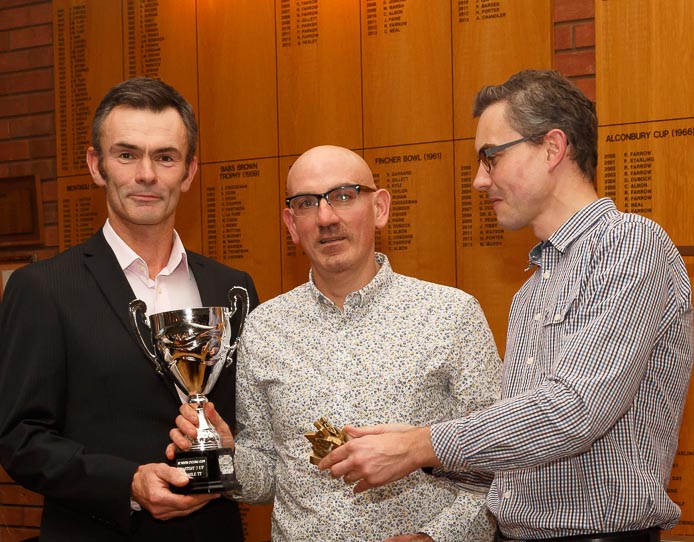 Fastest 2 Up 10 Mile TT: A new award which again reflects the growing participation of club members taking part in Open TT events. Richard Hancock and Adrian Taverna posted a best time of 21m 47s. During the season Richard and Adrian participated in the Victoria CC’s series and with two wins and one second place they won the Veteran’s Title. 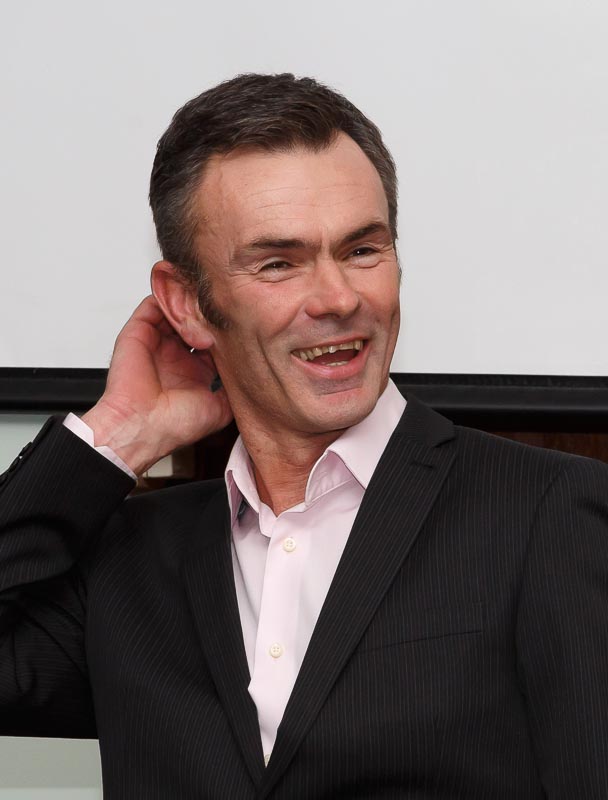 Richrad Hancock accepted the many awards on behalf of Ian Turner who was unable to attend.

BAR (Best All Rounder): This trophy dates back to 1939 and is awarded for the best combined performances over 25, 30 and 50 miles and the clear winner, based on the above, was Ian Turner. 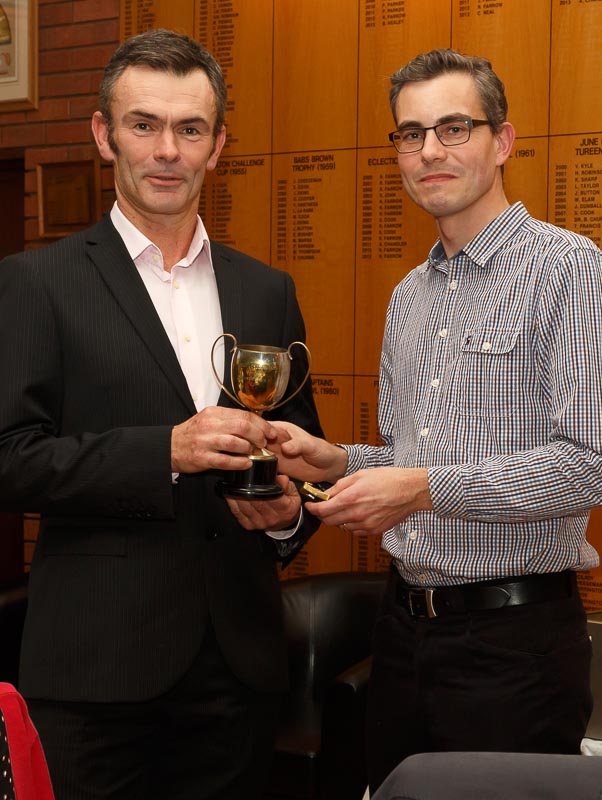 Veteran BAR: Like the BAR a trophy that has not been awarded for a number of years and now that he is the veteran category was lifted by Richard Hancock

As will be noted from the above Ian Turner dominated the racing season however due to work commitments he was unable to be at the Dinner. In his absence Richard Hancock accepted the trophies on Ian’s behalf. However he was at great pains to point out that they were only “on loan” to Ian and that he would have them back in 2015 !

Well done and congratulations to all our trophy winners and we look forward to the 2015 Annual Dinner.

Finally there are three trophies that could not be awarded on the night. They are the TT Handicap Trophy, the Ashman Handicap Trophy and the Ashman Fastest Time. The Ashman is part of the Handicap series and involves two laps of the 11.2 mile course. Due to roadworks on the course this could not be held and it will be contested on Sunday 7th December on the Ashwell course. The winners of these trophies will be announced shortly after the 7th.

Go here for a report on the Ashman. The Ashman handicap winner was Simon Richardson and the scratch winner was Adrian Taverna. Go here for the winner of the Handicap trophy who was Martin Kirby.

Scroll down for a gallery of additional photos from the dinner.